Well, it ain’t over the river and through the woods to grandmother’s house we go. The horse may know the way to carry the sleigh through the white and drifting snow, but we ain’t gonna be on that sleigh this year.

As i have listed probably to the limits of your boredom, i have experienced Thanksgiving in many ways, but not like this one. It will be Maureen, Sarah, and me. Oh, sister Patsy and nephew Mike will drop by to pick up their share of the dinner. But when we sit down to that dinner, it will be three of us. Alone.

This pandemic stuff has given me a lot of time, perhaps too much, to think about the meaning of Thanksgiving. i began sending out some messages to special friends and family, thanking them for what they meant or have done for me: gave up when i realized i was going to be writing those things well into next week. And man, i gotta go play some golf, not enough time.

My last “Thanksgiving” post for this year will be tomorrow (maybe). But tonight, the three of us in our own weird way will be at peace on Thanksgiving Eve. 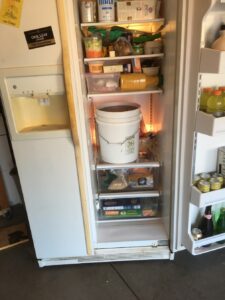 With much grunting, groaning, and disagreement along with a few surprises, like i need a new egg knock-off grill, i have prepped the ill grill for smoking the turkey tomorrow. i also have taken a five-gallon paint bucket, cleaned it to perfection (after all, it used to hold paint) placed the turkey in it, put in all of my magic and always off-the-cuff ingredients, and filled it with water. Now getting that bucket with that turkey and the water out to the garage ain’t no piece of cake. But with Sarah’s help and a complete space-condensing rearrangement of the contents, got the bucket in there.

i’ll pull it out early tomorrow morning and start the smoking process. It’ll be ready to go in the early afternoon — of course, if i don’t screw it up.

But tonight, i started the fire in the hearth, and made my version of an old fashion.

i discovered this version in Seattle in 1980. As current operations officer of Amphibious Squadron Five, i had flown to brief the captain and his Coast Guard cutter about their role in an Amphibious Landing Exercise at Camp Pendleton (there is a rather amazing story about that i will share later…if i ever get around to it). i brief the captain and his key personnel and checked into a Sheraton down town, i don’t remember exactly where.

It was late. i just wanted to have a drink and retire to my room, perhaps order a sandwich there. i did not want to go to the big, crowded, noisy fancy bar. As i walked toward the elevator, i passed a kiosk, a bar with about four seats. There was a guy at one end, finishing his drink and paying. i sat at the other end. The bartender came over and asked what i would like to drink.

She was a pleasant looking, middle-age woman who smiled when she asked. i responded with my own question, “What would you recommend?” She smiled and said, “An old fashion, I make a good one.”

“Well, let’s do it,” i said. Then, i watched her stir the powdered sugar into a small amount of water, then add the whiskey. She took a quarter slice of orange and maraschino cherries and muddled them. She sprinkled some bitters on top. put in a couple of ice cubes, add a bit of water and served.

The old fashion was good. \

i’ve been making mine like that for nearly forty years. i have had many old fashions, special, they say. i like them if they are done well, but generally avoid them in restaurants and bars because they are tough to make right.

That lady in that kiosk would smile tonight if she tasted mine.

i sit by the fire after Maureen’s lentil soup and pan bread have gone down splendidly. The fire will need one or two more logs for the evening. i plan to watch the San Diego State Aztecs play UCLA in basketball tonight…if i can stay awake. i am at peace, and at my age, peace can make me sleepy.

i will rise pretty early, set up the smoker, carry the turkey around from the garage, and begin smoking. With the “kamado” grill, it will take less time than the old way.

Throughout the day, i plan to thank folks. In fact, i start here. Thank all of you who read this for being my friend. Your friendship is important to me.

3 thoughts on “The Eve of Something Different and Something Old”