When i grew up, children were to be seen and not heard. We, as Little Jimmy Dickens sang, got the “cold taters.” We vacuumed, mopped, stripped, and waxed floors, we washed, dried, and put away the dishes. We made our beds and our rooms were supposed to be and generally were neat and clean (after we got through messing them up). We gathered the wash off the line, folded clothes, washed the windows. We took the garbage out. As soon as able, we mowed and trimmed the yard, and around fourteen, Daddy had me in the basement crawl space cleaning out the clunkers (burnt coal) he had thrown there when we had a coal furnace. i’m sure i have left several things out.

Now, i’m not bragging or whining. It was just the way it was back then. And it was a whole lot easier than my parents had it. My father stoked the boiler with slag wood for my grandfather’s steam engine when he was six. At ten, he dug a storm shelter in their backyard, and when it was found the water table was too high for such, he dug a drainage ditch for about 100 feet to the street so they could convert that storm cellar into a root cellar.

Sounds tough? Well, i don’t recall being upset about any of it with the possible exception of clearing out the clunkers in the summer. From what Daddy told me, it sounds like he had about as much fun as i did growing up. It was just things we had to do and didn’t stop us from having fun.

i am not criticizing how we raise kids now. i’m not a child raising expert and it wouldn’t matter one whit if i was (unless, of course, i could make a couple of mill’ writing a book about it).

That’s just the way it was.

But what it did do for this dinosaur was to give him an appreciation, maybe even joy, at doing small tasks correctly. Between twenty and seventy-two years of age, all of my jobs required me to attack the big things, the alligators in the swamp, and many of the small jobs were left to subordinates. But i did my share when time afforded such.

Sometime after i retired (sic), er completed my Navy active duty service and had been mister mom for a while, i applied for a San Diego City job in HR training. i got to the final hurdle, an interview with three other trainers. Sitting in front of the three, i immediately sensed the male interrogator of the three was not a fan of folks with military backgrounds, especially officers, or perhaps he just didn’t like me.

i answered a bunch of questions easily and because of my Navy experience, especially my last tour as director of leadership, management, and equal opportunity training, my responses and record was acceptable.

Then the male interrogator casually asked (with what i took to be an antagonistic air), “Would you make coffee for the group?”

i got it. i knew his purpose. i explained i would be happy to make coffee and in my last job, although the boss and senior to everyone in my department, i made the coffee about ninety percent of the time, because unless i was facilitating a seminar, i was doing paperwork, administrivia, while my personnel were training.

i gather he didn’t like the answer. i didn’t get the job. Now and maybe even then, i’m glad.

In my old age, i have grown to appreciate the training i received growing up. The alligators are gone. There is no subordinate waiting for me to take care of the big stuff or make a decision. There is no boss (well, except for a wife) to expect me to do something. I pretty much decide what to do when i want to do stuff.

i’ve found a great sense of satisfaction in doing the little things, pretty much the same things i did growing up: washing the dishes, cleaning things, taking the garbage out. Yeh, we got a yard guy, a gardener and landscape artist who does all that yard work because he’s better than me and what he does pleases my wife. Yeh, we got two cleaning ladies who come every other week and clean the house thoroughly. And i am rather pleased there aren’t any clunkers to clean out of anywhere.

So i pride myself on doing the little things and claim doing such should be done by everyone to develop pride in themselves or something. Like the SEAL Admiral Bill McRaven pointed out in his retirement speech gone viral and in the book he’s written, Make Your Bed.

Then it showed up. Sarah confided in me about a week ago, she had found this great deal on the internet and had ordered a Robot Roomba for her mother.

i was aghast. First off, Maureen is the financial overlord of this place and spending money she believes is frivolous is at the top of her no-no list. Secondly, she had long proclaimed she didn’t like the things and wouldn’t have one in her house.

Wisely i kept out of it. Kept my mouth shut. But boy, i was one anxious person, sweating blood thinking of the upcoming chaos.

It arrived. As taught by Brer Fox, i laid low. Sarah set up the thing. Maureen was dubious. The next morning, the show was on.

Maureen loved it. Go figure. When it finished its mapping, its cleaning, it sent Maureen a message on her phone letting her know all was done and it was back in its nest.

i concede. No more vacuuming the floors. The dinosaur enjoys it too. Neat stuff.

Of course, i have to watch my step and it seems like its a blind puppy as it wanders around the house and bounces off the walls. i keep waiting for it to whimper. i almost talked to it the other day. i caught myself reaching down to pet it. If i was a true dinosaur, it would make a nice snack.

And i still have to wash the dishes. 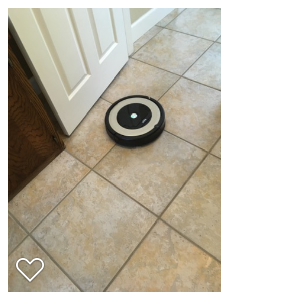