We had our nephew, Bill Boase, over last Saturday for supper and watched the Padres beat the Giants on television.

Maureen asked me to make my chili, award-winning i might add, and cornbread, also praised by many. My secrets? Well, my cornbread secret is i try, failing miserably, to make cornbread like my mother did. My chili secret is i cheat.

It’s not really big award winning chili. When Maureen was working at Parron-Hall Office Interiors, they decided to have a party featuring a chili contest among employees and their families. Maureen liked my chili, but i think she didn’t really want to lower herself to make chili. i mean she makes this wonderful white bean chili, but i think she realizes it’s delicate, and ain’t nobody gonna vote for a delicate tasting chili. So she asked me. i did but didn’t go to the party. She came home and told me i had won. i laughed. i cheated. But i now can claim it’s “award winning.”

i learned how to cheat from JD Waits…or maybe he learned how to cheat from me. JD is a very, very good cook. His parents ran a diner in Houston for years. i don’t know if it was award winning, but it should have been. Their patrons were many and quite a few gave JD’s father and Wanda Pearl, JD’s mother, lots of bennies, like tickets to see Spike Jones (but that is another story, one of JD’s best and makes me think of Christmas Story).

The origination of our cheating chili came in what could be the greatest hail and farewell party in Naval history (at least for JD and me) — a hail and farewell party is a wardroom celebration on ships when a new officer reports aboard to relieve an officer who is rotating to a new assignment. JD and i offered to serve as hosts when a number of officers were rotating within several weeks of each other. At the time, i had an apartment on Coronado and JD moved in with me for several months before moving to his own place (there are many sea stories involving JD and i from 1981 to 1983 and beyond, only a few told here so far).

This was a big affair. At least fifty officers and wives attended, maybe more, and a whole lot more of the 80 officers assigned were anticipated. JD suggested it would be easiest to prepare a huge pot of chili. Not having a clue what would be involved in chili making, i readily agreed. i had a couple of pots, but nothing that would provide chili for the number of expected guests. So we went to a large discount house in National City, sort of a gigantic Pic ‘n Save (yep, there’s a story about Pic ‘n Save for later…if Maureen will let me post it). We found a six-gallon pot of questionable metal quality for five bucks. Perfect.

Then we went to the commissary and got all the fixings. The most secret of our secret ingredients were in one box. Some Texan named Shelby Carroll put the stuff in the box. The day before the Saturday shindig, we stir-fried the stew meat, about a half a cow’s worth, and put it in the big pot as well as a couple of the biggest pots i had and put the pots on the stove. Then we added the stuff Carroll told us to add and several things like a gazillion red beans, in the pot Carroll did not advise.

JD, a master at getting me in trouble, oversaw the mixing and set the temperature on the range. i was in charge of stirring. JD took a nap. i had a beer. i went back after the beer and stirred. There was something on the bottom of the pots. i had not stirred enough and the elixir on the bottom along with the meat had burned. Not realizing what it was, i scraped it off the bottom with my big spoon. When i picked the spoon up, i realized what the charred goop on the spoon was.

The next morning, we sat a can of Hormel chili alongside bottles of Thunderbird and Night Train (“Serve Very Cold” for obvious reasons), a total outlay of six bucks. When folks expressed dismay, we assured them the Hormel can was just a joke. King Deutch, JD’s boss on Okinawa, showed up with his model wife, Jeannie. She insisted on having a glass of the Night Train. After tasting her wine, she assessed, “Quite elegant with a nice finish.” She laughed.

Most of the farewells were for officers transferring overseas or to the East Coast. Navy moving does not allow ammunition or alcohol to be included in a move. So all of the departing officers brought their entire collections of booze and donated them to the hosts of the party. JD and i were deliriously happy. After about six months, we became apartment mates again in the Coronado Cays condominium with the boat slip below our patio holding JD’s  25-foot Cal sailboat. When someone came to our double door entrance, 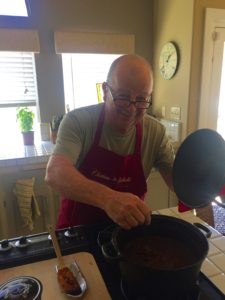 they opened the door and became face-to-face with the best stocked private wet bar in the Southwest corner crammed with every kind of alcoholic beverages from all over the world.

Everyone loved the chili.

Now, i don’t burn the bottom of the pan. The pan itself is cast iron and is nowhere near as gargantuan. Some people even think it’s award-winning, which it is…to my way of thinking. And yes, it is cheating, but i don’t care. It’s good.