i know many things and damn near all of them are worthless. i stole this statement and learned many worthless things (and a few that weren’t) from a legend.

i have told this story before. When i went back to refresh my memory, i realized my earlier memory was wrong as i had combined two, maybe three, of the Jimmy and JD parties in that earlier post. So the below is that story revised. i don’t care. i wished to revel in it and take a break when i began this post last night rather than continuing work on editing my manuscript.

Last night, i’m sure most of you, including my wife, could have found something that interested you on that big flat black screen hanging or propped up in your house where you spend most of your time. i couldn’t. Vanderbilt basketball’s team took a hit from Alabama and officiating in the morning, staying close to the end, again. That was my television for Saturday. Maureen is not into oaters, and i’m not into Victorian chick flicks although i would pretend to watch if she chose one for her watching pleasure — But then i surfed to find a movie for her when i came upon the documentary, Living with Lincoln. It was an incredible story. i connected. So all Television, or whatever you are supposed to call it today, isn’t all bad…

But this is about today and the legend. JD Waits catches up to me age-wise today. 77.

In case you missed it, JD and i ran wild in the Southwest corner for a bunch of years beginning in the early 80’s and have continued a milder and long-distance version ever since. The photo below is of “The Booze Brothers” in our formal attire for JD’s second marriage to Mary Lou — there was another marriage in between the two with Mary Lou. 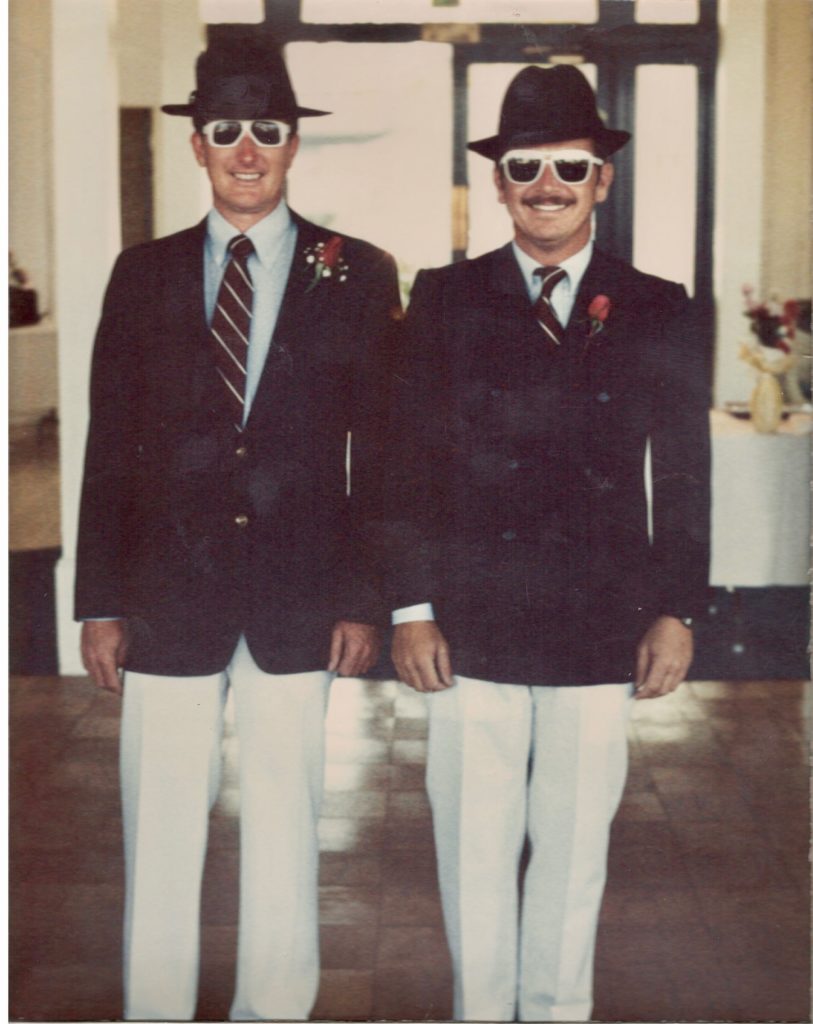 This morning i called, wished him a happy birthday, and then laughed a lot, a usual part of my conversations with JD. Some of his stories related today i could tell here and may later. Some of them cannot be here because neither JD nor i should ever be considered politically correct (or grammerly correct either and certainly have a penchant for off-color, and that’s putting it mildly, for that matter). But without any thought of his birthday being today, i made our Southwestern chili yesterday. Maureen loves it.

And that, that is what made me want to revel in the first version of JD and Jimmy Rye Southwestern Chili:

It was a great party. i don’t know how the idea came about. There were a lot of ideas that came about in the two-story, two-bedroom, two-bath, two-Navy officer apartment at 8th and E in Coronado.

Somehow JD and i decided to have a chili party there for the wardroom of the USS Okinawa (LPH 3) and invited guests. i think the final count of attendees was around fifty, in and out for three or four hours, maybe more. We planned for that many and realized we needed a really big pot to cook the chili.

We were single Navy officers who do not ordinarily have big pots. So we found a discount store, now gone, off of Plaza Boulevard in National City, and bought a really big, really cheap big pot that could hold something over five gallons. i’m pretty sure it wasn’t tin, but it was close to tin.

Now JD, among his many other talents, knows how to cook, especially Texas cooking. After all, his parents owned a diner in Houston and his father was the cook. So as we walked the aisles of the North Island Commissary, i was surprised after we got the stew meat, the red beans, the onions, the cheese, and the condiments, JD picked up several boxes off a shelf. Even though he could have made it from scratch, he declared it was much easier and just as good to use Shelby Carroll’s Texas Chili fixings packet.

So being us, we collected all the ingredients and the big pot in the apartment kitchen, and began. JD, a master at getting me in trouble, oversaw the mixing and set the temperature on the range. i was in charge of stirring. JD took a nap. i had a beer. i may have had another but when i went back to stir the chili in the pot, the wooden spatula struck something on the bottom of the pot. i had not stirred soon enough. The elixir at the bottom had stuck to the magic pot. Not realizing what it was, i scraped it off the bottom with my big spatula. When i picked the spoon up, i realized what the charred goop on the spoon was.

The next morning, we sat out a can of Hormel chili alongside bottles of Thunderbird and Night Train (“Serve Very Cold” for obvious reasons), a total outlay of six bucks. We placed them on the big liberty ship hatch cover i had converted into a large coffee table sitting in the middle of the living room.  When folks expressed dismay, we assured them the Hormel can was just a joke. King Deutch, JD’s boss on Okinawa, showed up with his model wife, Jeannie. She insisted on having a glass of the Night Train. After tasting her wine, she assessed, “Quite elegant with a nice finish.” She laughed.

Everyone loved the chili. They thought Southwest chili was incredibly good.

Now, i don’t burn the bottom of the pan. The pan itself is cast iron and much. Some people even think it’s award-winning, which it is…to my way of thinking. And yes, it is cheating, but i don’t care. It’s good.