At my age, memories fade and confuse. It seems i’ve written about this box before. Don’t care. The real memories, not forgotten and clear came rolling out yesterday.

It’s not much of a box really.

i got it out yesterday to replace a button on my working shorts. 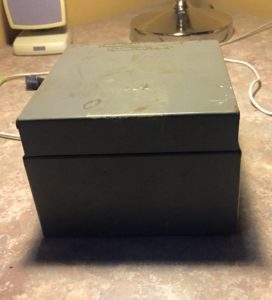 The box is about five inches square, an old haze gray box. In 1975, i found it my new stateroom on the USS Anchorage (LSD 36) when i reported aboard in San Diego to relieve the first lieutenant. Since the guy i was relieving had the first lieutenant’s stateroom, i was put in another stateroom. The temporary was on midship passageway in the after row, the first one on the port side in officer’s country.

Looking back, it seems almost prophetic where i was berthed. It had been the stateroom for the ship’s bosun. i never knew his first name. i imagine him as a balding big man with a deep voice. i do not know why. He left about a month before i reported aboard. He left me in an awkward position.

It was February. The Anchorage was about six weeks from a ten-month deployment to WESTPAC as a ship in Amphibious Squadron Five. i had never been on an amphib; didn’t know squat about them. i considered myself a destroyer sailor and had come from being the chief engineer on the USS Hollister (DD 788) out of Long Beach. But the Navy had decided to share the wealth and introduced split tours for department heads. i went from Destroyer School in Newport, Rhode Island to the Hollister for about eighteen months. Rather than spending three years in that billet, i rotated to an amphibious ship, one of the first department head grads to finish Destroyer school and then split to another type of ship, amphibious, or service force (oilers, ammunition carriers, etc.).

Although i was not enamored with the idea of leaving destroyers, the “greyhounds of the fleet,” i admit i was glad to leave chief engineering behind me. The job of keeping a thirty-year old, abused engineering plant up and running was harrowing to say the least. i was absolutely thrilled when i just missed my goal of holding it together well enough to meet all of her operational commitments. We failed to meet one five-day underway period just before we went into the yards for a periodic overhaul. It was one of my toughest jobs in the Navy.

So as the completely unarmed lieutenant reported to the Anchorage, he was counting on the ship’s bosun to provide all of his knowledge and expertise in maintaining amphibious operations at an acceptable level, at least until i learned more and became more proficient in boats, cranes, well decks, and landing operations.

One problem: the Navy (again) had decided to rotate the ship’s bosun a month before i got there. He left with no replacement.

But he left his little metal box in the small fold-out desk in his stateroom. With a felt-tip pen, he had written his name, “Bosun Holtzclaw,” now faded to almost illegibility, on the top.

When i discovered it the second day aboard, i picked it up and opened it. It was the bosun’s sewing kit. There were some small scissors, about a half-dozen sewing needles of various sizes, straight and safety pins, Navy exchange thread kits wrapped around cardboard, white and Navy blue spools of thread, and about fifty buttons from pea coat size to small uniform buttons for nearly all officer uniforms.

i didn’t have a sewing kit. Convenient. At least the boatswain left me something.

i have many tales about that deployment and my tour aboard Anchorage. Except for a couple of personal setbacks and a shocking abuse of power by the chain of command at the very end of my tour against Art Wright, one of the best commanding officers i had in my career, it was my best tour of my Navy career.

Not known at the outset, we would take part in the evacuation of Vietnam that May. We were chased by typhoons in the South China Sea. We did some rather amazing lifts of cargo and hit some great liberty ports. As first lieutenant, i was in charge of just about everything except engineering and the small Combat Information Center.

i was in charge of all exterior maintenance of the ship (the first commanding officer, Lou Aldana, told me my job was like a farmer’s: when it was good weather, my boatswainmates would work long hours painting and chipping. When it was bad weather, we would be getting ready for the good weather, and  when we had finished, we would start over again).

i also was responsible for the ship’s boats (an LCVP, motor whale boat, and the captain’s gig) as well as the embarked Assault Craft Unit boats, two LCM8’s (70-foot landing craft) and an LCU (120-foot landing craft). The two 60-ton cranes were my responsibility in addition to the flight deck, the mezzanine deck, and the well deck. I was the well-deck master for all boat and cargo operations. i was responsible for all flight operations and the flight deck. i had the gunnery department under my aegis and was in charge of all ammunition storage. Troop berthing (about 600 enlisted berths) were in my bailiwick and being in charge of any troops when they were embarked. There are probably a couple of things under my responsibility i have left out.

i was one of the four Officers of the Deck (OOD’s) underway and Command Duty Officers with 24-hour duty every fourth day. i was the sea detail and general quarters OOD. One load required me on station throughout 42-hours, followed two days later by a 22-hour load, and there were numerous loads twelve hours or longer.

And you know what, it was fun. No, it was a wonderful time to be a mariner, a Navy surface officer at sea. i’ll cherish the memories for the rest of my life.

i am a collector of memories, some might say a third degree hoarder. i have a garage full of stuff from the past, my past. i have an inexpensive glasses holder on my nightstand. My aunt gave it to me for a small Christmas present. I think of Aunt Bettye Kate every night before i go to bed when i use it for my glasses. i have a wine bottle foil cutter my brother and his wife gave me one Christmas. The plastic holder is broken and i have other foil cutters but i always use this one because i think of them when i open a bottle of wine. i have about two hundred photos of my daughters and grandson around the house and garage so it feels like they are with me when i am anywhere in our house. i have my father’s Tasmanian Devil floorboard covers i gave him for his Ford Escape one birthday. Every time i get in my car, i think of him.

And on a closet shelf, there is this little metal box tucked away for when i have to sew a button on some pants or shorts. Anything more sophisticated tailoring than that i seek out Maureen or even a tailor. At Castle Heights, i had about four or five “bachelor buttons” to use vice sewing on a button: emergency kind of thing. Yep, i have a couple in the metal box that allows me think of the hilltop back a long time ago.

Each time i pull that little metal box out, i think of the man i never met. i wish i had met Boatswain Holtzclaw. i have the greatest admiration for Bosun’s, some of the finest men and capable sailors i have ever met. i suspect some of CWO4 Holtzclaw wore off on me through his little metal box.