i almost threw it away.

It was in the middle of a bunch of stuff in a box of many boxes i was cleaning out.

It was yellowed and sort of fragile. i was afraid it might crumble into pieces.

But it was a newspaper clipping, easily recognizable as a sports item. “Lebanon Wins / Over Watertown” the two-line, one column headline read.

Being an old sports reporter and editor, i paused and read the three paragraphs and cringed. It was not the way i had learned to write sports stories on athletic contests: first paragraph twenty-five words or less letting the readers know “who, what, where, and when;” all other paragraphs short and written with the least important parts of the story at the end, so the editor when making up the hot-type page could throw out linotype lines from the bottom up to make the story fit in the space. Half-way through the third and final long paragraph, i found the reason the clipping had been saved. i wondered if other such stories had been stashed away by my Prichard family. The important part was even underlined: “Captain Prichard ended her high school career by leading the scoring for the evening with  ten points.

i shook my head. i’m pretty sure my mother, the captain they lovingly nicknamed “Runt” since she topped out somewhere around five-feet tall, played one more game. i’m pretty sure she told me they had one tournament game, which they lost. Still, “Runt” had a pretty impressive run. Her single game and season point totals remained a Lebanon High School record for a quarter of a century. She was one of the initial inductees into the Blue Devil Hall of Fame. i still laugh when i think of her standing between Rita Rochelle and Louis Thompson, both of whom dwarfed her.

And to give the un-credited writer credit, he or she did mention nearly every player for both teams, men and women.

When i concluded, i thought it would be good to post the clipping. After all, there are a lot of Lebanon and Watertown folks who might recognized the other names. 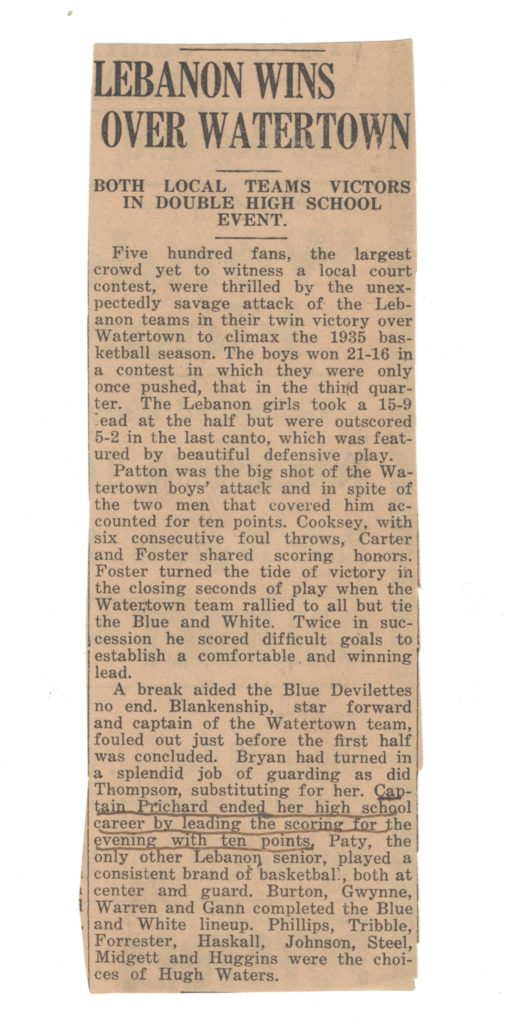