Thank you for your story. I also served under Captain Hayes on Belleau Wood and remember the incident you refer to. I was Boatswains mate on the bridge at that time. Many fond memories of a truly great man.

Now, the Belleau Wood was a very large ship, in fact  the largest at the time after carriers. There were a lot of sailors on her. But on the bridge entering port, there wasn’t more than a dozen, if that. So here, twenty-seven years after the fact, some guy somehow out of the blue reads my post about Captain Hayes. Robert has to be one good guy. After all, he read my post, he was a boatswainmate, one of the oldest and best ratings in the Navy, and he admired Captain Hayes.

I repeated the sea story to Maureen when i told her about Robert’s comment.

Have a good night. 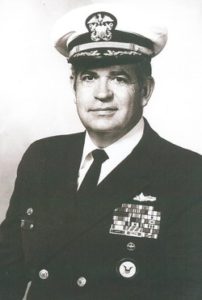 He also was in a underwater demolition unit (the origination of Navy SEAL’s) in the Pacific, was awarded a masters degree in nuclear physics from the Navy Postgraduate School in Monterrey, California, and was in Admiral Byrd’s command in the admiral’s last exploration of Antarctica.

I climbed the ladder to the bridge, feeling a bit awkward. The port should be talking to the captain of the ship, not the commodore, and there was this aviation-surface tension, not to mention the reverse seniority awkwardness. As i arrived, Captain Hayes in his gravelly booming voice directed his junior officer to give me the microphone to the bridge-to-bridge radio.