i suppose there are an innumerable number of men named Mike Kelly.

i know one. He lives near Houston. He is from Texas and Montana and probably several other places i don’t know about. He lived in the Southwest corner for a long time before moving East. He is a giant of a man in many ways. i met Mike through a mutual close friend. Jim Hileman and Mike go back a long way. They both were in the Navy on carriers in rougher times. i’m pretty sure it wasn’t together, just similar. The two became fast friends working for Ma Bell out here.

i met Jim Hileman at my wedding. 1983. He was late to the reception because he had a golf round that morning. When we were introduced, he explained, and i asked him why hadn’t he invited me to play. We’ve been fast friends ever since…but that’s another story and one way too long to tell here.

Shortly after i met Jim, he introduced me to Kelly on a golf course. From that point on, we played golf together until Mike and Sheri moved back to Texas to be near their granddaughter and son.

Mike rose through the ranks of AT&T until he was at an upper management level. He also got his masters in fine arts. He was/is a landscaper, a farmer, a hunter, and a wonderful artist among other things. Much more importantly, he is a great friend. i remember how he and i picked up Sarah from day care when she was one. She was crying in her baby car seat. While i drove, Mike put Sarah in those gigantic arms of his, and Sarah immediately quit crying and started to coo. He also is tremendous artist. We have one of his chalk paintings hanging in our master bedroom.

A week or so ago, Jim and his wife Sharon returned to the Southwest corner from near Dallas. They had attended their daughter Mandy’s wedding. Since they were in Texas, they rolled on over to Houston and spent a day with Mike and Sheri.

“They haven’t changed,” the Hileman’s commented on the Kelly’s. i expected as much.

Then Jim gave me a present. Kelly had given two six packs of beer to him, one to be given to me upon return. Jim gave me both. He doesn’t drink. i have given some to friends causing them to laugh. It’s pretty good beer made in College Station, Texas, of all things.

Mike Kelly thought the gifts were appropriate. i found a perfect spot for drinking it. It’s the workshop side of my garage. That’s when i say the words on the label most, although i’m sure Mike had heard me shout them in frustration many times on the golf course.

As usual, Mike hit the nail on the head: 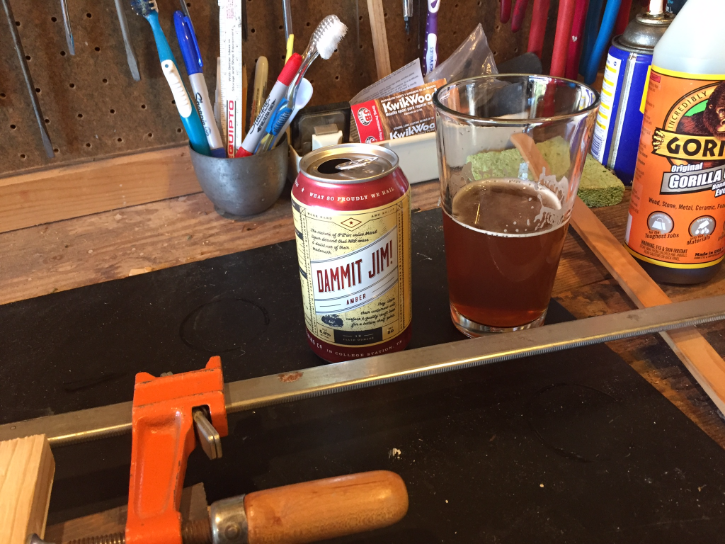