The story is dated and a bit overwritten. The writer, Laurence Zwisohn, was obviously a fan of the King of the Cowboys.

i have justifiably been accused of overwriting and being “sappy.” i also was a huge fan of Roy Rogers, shown below with Trigger (i purloined this photo off of a Mexican website, http://undiacomohoyhuaraz.blogspot.com/2015_03_01_archive.html). 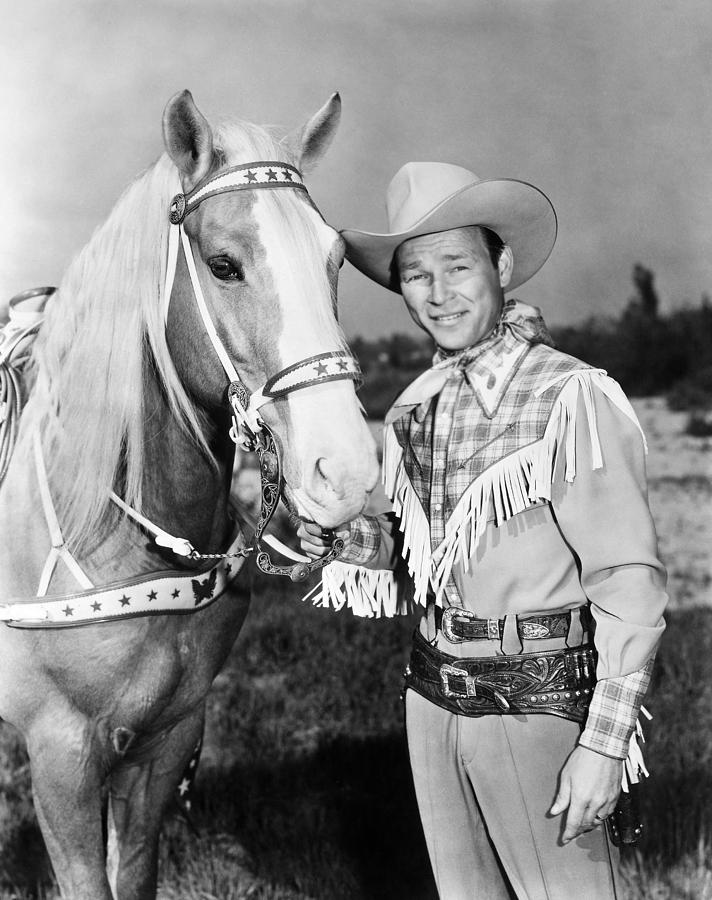 My father in his later years and i would watch Roy’s movies together. Now, on rare occasions, only my daughter Sarah would deign to watch them with me.

i don’t think there are many folks in the generations following mine could understand, let alone enjoy Roy’s “B Oaters.” Many would complain they were not realistic. Many would complain about Roy’s lack of faults or the villains, you know, the ones in the black hats. Many would complain of the violence. After all, the villains did shoot people (Roy just shot the guns out of their hands), and there were lots of fights where Roy fought fair and his adversaries would cheat, throw dirt in his eyes, and use chairs and such to try and whack Roy unsuccessfully. As expected, or even known beforehand, Roy would ward off the yellow-belly cheater’s attack and knock him out (often after catching him in a horse race — no horse was faster than Trigger — diving and taking him and the culprit rolling down a hill) and win the fight. But yes, it was a fist fight earning an R rating by the supercilious.

There would likely be others who would complain about animal cruelty. They would likely want Trigger to be put out to pasture, and the cows not be herded and branded.

Even though, as Zwisohn points out, “Indians” were always friends with Roy and never fought against him, or him against them, there would be some “Native Americans” who would object to the portrayal of these indigenous people as degrading.

Atheists would decry Roy and Dale’s fervent religious beliefs. Rocks would be thrown at the couple from all angles. The left would deride him. The right would demean him. Journalists would haunt Dale and him, looking under every rock, trying to find dirt to print. Some would probably just print something on a hunch. Attorneys would be looking for a kid who missed getting an autograph so they could sue.

It was a different age, a different mindset. Sure there were folks who were no better, perhaps worse than many today. Certainly, there were backdoor deals by the bigwigs in every facet of American life. Prejudice raged in every direction. There were actresses who were abused, but some using the director’s couch to climb the ladder of stardom. Hollywood was a nasty business with a dark underside and shaky morals.

But Roy and Dale were above that. They lived a rather incredible life of religious belief, unblemished behavior, and success.

The museum made way for a highway in Apple Valley. They moved it to Branson, Missouri. It lasted for a while and then closed for lack of interest. Sad. It was a good place to go and feel good.

But if you want to feel good about at least one couple getting it right for them, then read Zwisohn’s article. It’s almost like magic, like pretending. But Roy and Dale did exist. The piece is a bit long, but for me well worth the read:

And every once in a while, the Western channel during daytime programming, not prime time, will vary from their usual inundation of Gene Autry movies to show one of Roy’s. Watching it for me is like getting healed. The bad guys lose, the good guys win, and Roy and Gabby ride off into the sunset, obviously after Roy has sung one last love song to the heroine.

2 thoughts on “King of the Cowboys”