Actually, i never went away. i monitored, but not as intensely or frequently. i shared links to the posts on my website and my Democrat columns, and i posted albums of pictures i’ve scanned for posterity because i’m too damn old and ornery to learn how to share those old photos with my family any other way.

The truth is i like sharing stuff back and forth with friends and family. Those reconnections and new ones give me a lot of pleasure. i decided i just couldn’t give up those connections.

But i’ve made some rules. i’m only going to “like” posts i truly enjoy or find especially interesting. i am no longer going to “like” a post because i want you to know i’ve actually read it.

i’m going to skip all those pass-along jokes, feel-good videos, prayer requests, political comments, copy and paste demands, etc. That doesn’t mean i don’t respect you. It just means i’m not on the social media for such stuff. i like the social aspect.

You see, i set myself some goals, not resolutions, before the  end of the year to reinvent myself. i want to live the rest of my life in a better, healthier, more productive, and more giving back mode of operation. i also don’t want to sweat things anymore. i want to truly retire except for that giving back thing, which i plan to do through writing.

Well, i backslid on those goals, not resolutions, pretty soon after the turn of year. Not completely, mind you, not even too badly, but i did backslide in my opinion. But you see, i have an automatic reprieve. My birthday is January 19, which i share with Robert E. Lee, Edgar Allen Poe, Paul Cezanne, Jean Stapleton, Tippi Hedren, Phil of the Everly Brothers, Janis Joplin, and Dolly Parton, among others.

And of course there is James Winston Watts, who developed the frontal lobotomy.

It all seems to fit. 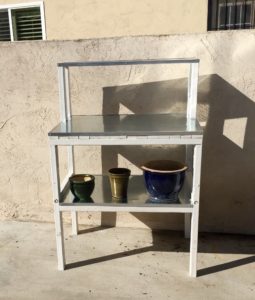 So i’m renewing my efforts to reinvent myself. Whatever is left in this life for me, i intend to enjoy it.

This morning, i completed a project, the first one among many. It’s not that impressive. i made an herb table which we will put out in the old dog prison (no dog, no prison) where Maureen can work on raising her herbs and potting flowers.

It’s really not impressive. i made it out of scrap lumber and some sheet metal. It is not square, but i did it with no plans, just sort of began puttering.

Still it’s a change. i have somewhere in the neighborhood of fifteen thousand projects in my garage and office, and that’s not counting the four billion and growing list Maureen has for me. This herb table is the first step in completing those tasks and the beginning of the reinvention of my reinvention. 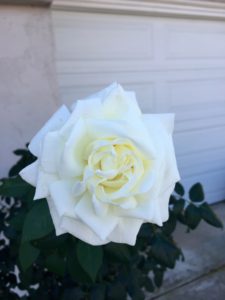 And as i drug the table from the garage work area to the old dog prison, i passed the rose bush Maureen has in a planter.

i didn’t see this at first what with rousting about the table. i experienced the aroma first, one of the sweetest smells i’ve come across in a while.

Then i saw the rose. ‘Bout damn near perfect. Not a bad way to kick off a reinvention.

1 thought on “January 19: My Second Day of Reinvention This Year”