This is a story i have told innumerable times. It  is timeless. i have loved many women. i still love many women. However, there is this woman i met thirteen days and 37 years ago who is pretty special to me. She is my wife. i am her husband. She is Maureen Renee Boggs Jewell. She turns sixty-eight today. She doesn’t look sixty-eight. She remains  beautiful. And i remain deeply in love. This story, told innumerable times, is too good not to tell again.

Maureen, Happy Birthday; i love you:

In March 1982, i was the Weapons Officer on the USS Okinawa (LPH 3), an amphibious helicopter carrier – For some quirky reason, the department head position was entitled First Lieutenant, which i preferred, on all of the ships of that class, except the Okinawa. My commanding officer was Captain David Rogers, one of the best captains i had on the ten ships on which i served.

Dave was very proud of his ship. He desired it to be the best, and asked me to come up with a way to make our quarterdeck (for landlubbers, this is the main, if not the only entrance to the ship, a ceremonial and practical place for greeting guests coming on board, a check-in, check-out place for officers and crew, and for enforcing security. In short, like the bridge at sea, the quarterdeck is one of the most important places on the ship when moored or anchored.

But on carriers, or at least helicopter carriers like Okinawa the quarterdeck was located on the hanger deck, one deck below the flight deck. It was a cavernous area for stowing helicopters and performing maintenance. It was not a showy place. That made making the quarterdeck better than all of the others on the waterfront a difficult task.

Okinawa already had a huge red Japanese torii (ornamental gate) we placed on the quarterdeck when in port. But the captain wanted our entrance to be better. That was my challenge.  Finally, a couple of my division officers, CWO4 Boatswain Roger Ellis, and i came up with a solution.  A bosun is the heart of deck departments on large ships. Bosun Ellis was one of the best bosun’s around. His wife was a very short and very round Filippino lady who was involved in a lot of department activities, including creating beautiful macramé (she made the lanyard for the boatswain pipe the department gave me for a good-bye present  a year later and it hangs from my Navy brass clock in my home office still).

The Okinawa’s quarterdeck spilled into the hangar bay, a huge but not very attractive space. Guests, while waiting for whomever they had come to visit had to stand in the area. We decided to buy partitions and make a waiting area with some nice, but durable seating and hang artwork on the partition walls.

Captain Rogers thought that was a marvelous idea. So on Friday, March 12, 1982, Boatswain Ellis and his first class boatswainmate were to include panels in their bi-weekly department shopping run. The boatswainmate had straggly, straw-colored hair, which he combed into as much of a ducktail as a regulation Navy haircut would allow. On these runs the duo wore civvies. Both had on jeans. Bosun Ellis had on a black tee shirt, which did not hide his more than adequate beer belly. His hair, jet-black, was thick and also worn with a hint of a ducktail. The boatswainmate wore a studded black leather biker’s jacket over a white tee shirt. When he took off his jacket, his cigarette case was wrapped in the left sleeve of the tee shirt.

They left the ship about 1400. i had a lot of paperwork and stayed in my department office until well after 1700, more than an hour after liberty call. That’s when the pair returned.

Somewhat surprised to find me, the bosun told me they had gotten all of the needed supplies except for the panels. When i asked why, he explained, “Well, sir, we went to Dixieline Lumber (the local hardware store). They didn’t carry panels. They suggested we try this place downtown, Parron-Hall Office Interiors.

“We went there and it was real fancy, way above our pay grade. But this lady came out and helped us. She was nice and pretty, and I noticed she didn’t have a ring on her left finger.

“But she was way too skinny for me.”

Handing me the brochures he brought back from the lady, he concluded, “So I thought you should go down there and take care of getting the panels.”

On Monday morning, March 15, 1982, i drove downtown and walked into Parron-Hall Office Interiors. The receptionist called for Ms. Boggs. Our first meeting is still disputed. She says i had on my Navy hat. i have never worn my Navy hat indoors and insist my piss cutter was either in my hand or folded in my back pocket. i say she had on a light dress, and i could see her legs silhouetted by the sunlight coming through a window. She says no way.

Regardless, our panel search was over. Somehow i managed to get about five “business lunches” out of the purchase. i hated fraud, waste, abuse, and corruption, and tried hard not to let this beautiful young woman influence me, but i did keep the relationship as friendly as possible. When the purchase was made and the delivery was on the ship, i went to her office for the last administrative check on Thursday.

Then, i asked her if she would like to go see John Lee Hooker at the Belly Up Tavern in Carlsbad that Saturday.

i replied, “He’s one of the best blues singers,” and then inquired, “You do like the blues, don’t you?”

She evaded the question by declaring, “I like all kinds of music.”

She then stated i should know she had a “primary relationship.” i asked, “What’s that?” She laughed.

We went to see John Lee at the Belly Up Tavern Saturday night, and then we went back to the Belly Up on Monday to see Doc Watson.

And so it began.

As to why i was attracted to her, she was beautiful but the realization we could have a relationship that lasted for a long time came to me on a special night the following autumn.

We had been out for dinner uptown, not in La Jolla, which was most often our preference. For some reason, we were driving around Kensington, an upscale neighborhood. We passed a beautiful ravine, and i parked. We just talked about many things in the short stop, but she started talking about her beliefs. It struck me hard that she and i had incredibly similar views about living the right way. The more we were together the more i recognized how caring she was without a mean bone in her body.

And then, she sent me flowers. It was probably a first. A florist delivery truck pulled up on the pier and  the driver delivered a rather impressive floral array to the quarterdeck.

“These are for Commander Jewell,” he said. They were delivered. i became a shipboard legend. This rather incredibly beautiful woman had sent flowers to Commander Jewell.

Then i got orders across the country to the USS Yosemite (AD 19) in late summer, which would deploy across the world to the Indian Ocean. She voiced concern about our relationship lasting so far apart. So i asked her to marry me. She said yes.

Before i left, she gave me some photos of her. One of her bosses, Bob Long, was also a very good photographer and had a shooting session with her. My favorite was enlarged, framed and hung on the bulkhead of my shipboard office. It is now above the desk in my home office. 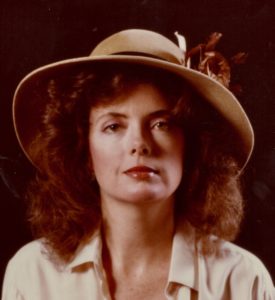 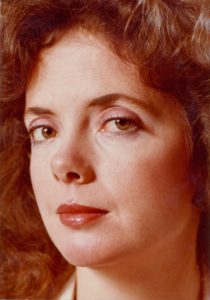 There is much more to this story, but it best be told another place and another time. Maureen continues to be the focus of my life, and fortunately, i continue to be hers…and it just flat doesn’t get any better than that.

The story just doesn’t get old for me.

Thank you, Maureen, for being you…and  Happy 68th Birthday.

4 thoughts on “It Was Meant To Be”