Long time. Worth it.

So in celebration, “Betty Lou’s Getting Out Tonight,” but, excuse me, Bob Seger, it ain’t Betty Lou. It’s Maureen. She and i are going to a wonderful truly French restaurant tonight, most fitting because we found each other by dining out two or more times a week for the  entire 1982 summer.

One year on this occasion, i posted how we met for our anniversary. i decided make it an annual post for at least two years. It was about how we met:

“Way Too Skinny for Me”

It was early March 1982. i was the Weapons Officer of the USS Okinawa (LPH 3) homeported in San Diego. The Weapons Officer billet was titled “First Lieutenant” on other amphibious helicopter carriers. Regardless, it meant i was charge in pretty much everything not aviation, engineering, operations, or supply related.

One of those responsibilities was being in charge of the quarterdeck where all visitors entered the ship. From previous regimes, we had a large red torah that spanned the entrance into the helicopter deck below the flight deck. It was impressive, but Captain Dave Rogers called me to his cabin one afternoon. “Jim, I want our quarterdeck to be the best quarterdeck on the base. I want it to be the most impressive and known to be the best by everyone homeported here.”

i discussed how we could make the quarterdeck renowned  across the waterfront with my division officers and Boatswain Warrant Officer 4 (CWO4) Ellis. The Bosun had a bit of a beer gut. He was married to a wonderful Filipino woman who macraméd  a lanyard for the boatswain pipe the bosun gave me. She was about 4’8″ and almost that wide. Great lady, just a bit wide.

So we decided we could create a sitting area with panels, some chairs, maybe a sofa, and hang framed photographs about the Oki on the walls. That way, the visitor wouldn’t have to stand around in the working bay of the helicopter deck. Great idea.

We had to decide where and how to get panels. Since the Bosun and his first class were going to make a supply run Friday, the next day, i asked them to check out panels while they were on their run. Liberty call was early and the Bosun and his first class left around 1300. They were dressed in their standard liberty civies. The Bosun had on Levis with a blue tee shirt with his thick black hair combed back as much as it could to resemble a ducktail. His first class had on his biker’s jeans, white tee shirt with a leather jacket and a silver chain dangling down from the jeans. He had straw blond hair also combed back and the gap of a missing tooth was the final touch. They left for their mission.

i had a bunch of paperwork to work through and continued on after liberty call. The bosun came into the office with several boxes of toilet paper (i never understood why he didn’t get it through supply).

“i didn’t think you would be coming back to the ship, Bosun,” i remarked.

“Well, i didn’t want to keep this stuff at home over the weekend,” he replied.

“Did you find any panels?”

“Well sir, we went to Dixieline (a local lumber and home center). They didn’t have them, but they told us to go to Parron-Hall.”

“Yes sir. They’re an office furniture place downtown across from the county admin building. We went there, but that place was way too classy for us. They had desks in the showroom worth more than my house.

“You are gonna have to go down there and see about them panels.”

“No sir, you are gonna have to go down there. It’s on Ash Street.”

Then he added, ” You know sir, the woman who waited on us was really pretty. i noticed she didn’t have a ring on her finger. i’m pretty sure she’s single.

“And she’s way too skinny for me.”

Midday on Monday, i drove down to Parron-Hall Office Materials. i asked the receptionist to see the person who had given her business card to Bosun. i stood at the entrance to the showroom. She came walking across with the sun shining in the window behind her (think Glenn Close in “The Natural,” only prettier). She claims i had my piss cutter on my head. That, of course, is not correct: i am a country boy from Lebanon, Tennessee raised correctly by my parents, Army ROTC at Castle Heights, a Naval career and, by the way, an officer and a gentleman. My hat was off.

We had numerous discussions about the panels, which required about four or five “business” lunches over the five or six weeks for the panels to arrive. When the deal was done, i asked for that date to see John Lee Hooker at the Belly Up. We attended several events over the summer including sailing with JD in the “Fly a Kite” race where we became (or at least JD became) a legend. We went out to dinner too many times to count.

And, as i have noted before, one night up in Mission Hills, i was driving and just pulled over and parked in a residential area overlooking one of canyons. We talked. And i realized we thought a lot alike. It took until early February before we determined it was, as they say, it was meant to be.

With the aforementioned post, i included a bunch of photos of us. This morning, Facebook showed me my post photo most viewed from five years ago. It was Maureen, circa 2003. i thought it more appropriate than all of those pictures of us. After all, she is the reason this all happened. 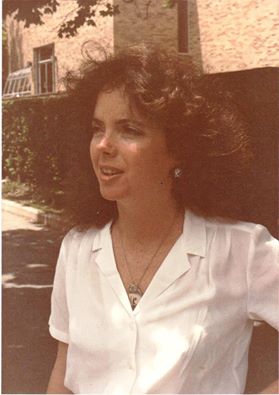 As i am wont to do, last Friday, i left a note for Maureen when i headed out early for my Friday golf round. My notes tell her i fed the cats, any important items she needs to know before we talk by telephone, and either a poem i wrote for her or some love poem by a more famous writer than i am. Here’s last Friday’s poem with my addition.

Betwixt mine eye and heart a league is took,
And each doth good turns now unto the other:
When that mine eye is famish’d for a look,
Or heart in love with sighs himself doth smother,
With my love’s picture then my eye doth feast,
And to the painted banquet bids my heart;
Another time mine eye is my heart’s guest,
And in his thoughts of love doth share a part:
So, either by thy picture or my love,
Thy self away, art present still with me;
For thou not farther than my thoughts canst move,
And I am still with them, and they with thee;
Or, if they sleep, thy picture in my sight
Awakes my heart, to heart’s and eyes’ delight.

and sometimes, i doth think
it’s surprised pride that makes
glad gush all over me
like
a delicious rash
because
i am married to someone so beautiful
but
no:
’tis love, deep abiding love
of this woman
who
makes me whole
i feel
flowing through my every fiber
forever.

i think i’ll keep her.