There were no photos on the internet that i could find — of course, there are ton of things on the internet i can’t find: i remain technically challenged. In fact, there was no mention of Hurley’s at all.

Looking at a Google map, i believe it was on Brewer Street, off of Thames Street. The Tennis Hall of Fame was on the other side of Thames. There was a grocery store on the opposite side of Brewer, if that was the name of the small street, almost an alley. 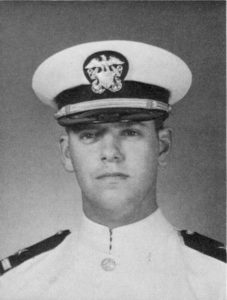 Lanny was a big guy from North Carolina and UNC who went EOD. He and i went from OCS to Key West where the two of us shared a room in the BOQ.  Lanny went through basic underwater swim school while i was in Anti-Submarine Officer School. We had a ball but lost track of each other after Key West.

Doc was the hippie’s gift to Navy Officerdom out of Philadelphia and Duke. He showed up on Friday, September 15, 1967 with his head already shaved, which pissed off the first class OC’s who were our DI’s (drill instructors) as well as the barbers in charge of embarrassing us by shaving our heads (except for Doc’s). Doc was not only my barracks roommate on the fourth deck of King Hall, our service numbers were only two numbers apart (Doc’s 726236, mine 726238 — service numbers had not yet been replaced by SSN’s, which is now a taboo thing because we are 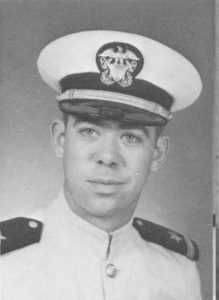 so advanced and so are small mean people who like to cheat people rather than make a real living — Doc’s father was CO of a top secret, innovative minesweeper out of Charleston, South, Carolina (which fortunately was never deployed, another story). Doc’s orders were to the USS Guam (LPH 9), homeported in Norfolk. My first ship, the USS Hawkins (DD 873) moved her homeport from Newport to Norfolk in July 1969. We hooked up again which resulted in several other stories to tell.

We lost track when i headed west, so west it’s called East, Southeast Asia to be specific. But a grunch of years ago, we reconnected. Doc was in NYC with a converted barn for a home on Long Island. He had wandered around Bali for a couple of years and ended up as a television writer and producer.

We again lost touch. This morning, however, i did a couple of internet searches and found Doc had moved to Wilmington, North Carolina and, although i did not find Lanny, i found this younger guy named Lanny Harer in Raleigh, who just has to be his son. Attempts to reconnect will follow.

But this, after that typically long-winded explanation about who we were, is supposed to be about the three of us and Hurley’s. After Saturday’s Pass in Revue and personnel inspection, the OC’s got liberty from around noon until taps and then again on Sunday until 1700. Big deal. We made the best of it.

We tried the Viking where they had loud bands and a bunch of young folks dancing but the women seemed to prefer the civvy-clad guys compared to the guys in the goofy looking OC uniforms.

We ended up at Hurley’s.

Outside, Hurley’s was not impressive, just another building. Inside it was tables, a small dance floor, and a bar with a stage back of it. On Saturdays, the music was mostly up tempo jazz with some popular stuff mixed in. We would hit Hurley’s early. It was the Northeast version of Mexican Village in Coronado where women could meet Navy officers and sailors. Lanny met a girl from Fall River and they got a thing going. Today, when i see “Officer and a Gentleman” is on some television channel, i think of Lanny.

But before the girl, we would drink and listen to the music. On the way back to the barracks where we always, always arrived just before liberty expired, we would stop at Dunkin’ Donuts. There we would get a dozen jelly-filled buns.

Being somewhat less than pristine, we would report aboard the barracks and then go hide in a stairwell. Some poor smuck OC had pulled duty and had to conduct a security check of the barracks every hour. We would hide in the remotest ladder well on the deck above the smuck’s route. When he looked in the ladder well, we would pelt him with the sugar coated, glazed donuts, and run before he could see who it was. Of course, he would get back to the quarterdeck and have to explain how he was covered in powered sugar, jelly, and shards of pastry.

Then Lanny met this girl. They hit it off. Lanny asked her to meet him the next Saturday. i mean this was serious stuff. She said she would love to meet him again, but she had a girlfriend who came with her from Fall River and Lanny must provide someone to accompany her, a double date, if they were to continue to meet.

Lanny, Doc, and i put our collective heads together and came up with a plan. The friend was not particularly good looking. i got elected to be her “date” but with a twist. We decided to explain i was from the German Navy on a new program to swap officer candidates and i could only speak German. Doc, we claimed, was my interpreter.

This was somewhat difficult to pull off since Doc nor i could speak a word of German. We spent about two hours in Hurley’s that Saturday evening with my producing guttural syllables i thought might sound like German and Doc explaining to my date what i was saying while Doc and his unsuspecting girlfriend listened. My German and Doc’s interpretation became more and more absurd with each pursuant cocktail. The three of us  spent most of the two hours suppressing our laughs until Doc informed the group he had to take me back to the barracks because i had to call my family in Germany (time difference, we explained).

Then there was Sunday afternoons at Hurley’s. i know Doc or Lanny accompanied me, sometimes both, but it seems i always went to Hurley’s on Sunday afternoons. i would sit at the bar for the entire jazz jam session. The regular band and quite a few other musicians would show up and play some great music. My favorite song to which they jammed remains one of my favorite songs of all time, perhaps because of my Sunday’s at Hurley’s. They had this woman in the band, the singer, who nailed “My Satin Doll.” 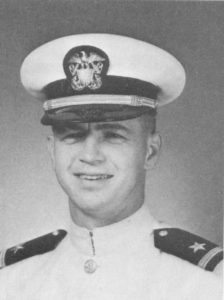 i would sit at the bar, twirling the ice in my bourbon on the rocks, and feel lonely when they would perform a ten-minute or more set of “My Satin Doll.” i was romantic. i was alone. i was sad. But it was good because “My Satin Doll” was consoling.

Strangely, it made me feel good.

But i still listen to “My Satin Doll” and remember.