My plan was to take today off. i ended up taking a chunk of that last night. Today, i fooled with a number of things but wrote most productively today compared to the others. It’s time to provide some thoughts about this sojourn to somewhere:

My first awareness of Flagstaff, Arizona occurred in 1950 when i was six years old. My parents returned from what i remember as a month or more trip with my Aunt Naomi Martin. i don’t think Uncle George accompanied them, but stayed home and worked and kept my cousin Maxwell.

My Aunt Bettye Kate Hall picked up Martha, 4; and Joe, 1; and me after her workday at the Lebanon Woolen Mills and we spent the evenings and nights with them in their home at the foot of Wildwood Avenue. In the morning she would take us to Graham and Mary Helen Williamson’s apartment on the first floor of an apartment on the corner of West Main and Pennsylvania Avenue.

Graham was our older cousin, and he took me under his wing up during my early youth. i vividly remember being in their next home. Graham was working on a band featuring his fiddle playing (he later was a back up fiddler for Roy Acuff). He would let me sing “Kaw Liga” when they practiced it.

Mother, Daddy, and Aunt Naomi concocted the trip to go see Uncle Wesley and Aunt Barbara Jewell somewhere in middle to northern California. i do not recall their route and other stops in-between, but i do know they stopped in Flagstaff because they brought back some souvenir glasses from wherever they ate there. So, at least part of their journey was on Route US 66.

The souvenir glasses could have been a set, several, or just one. But i remember it vividly. Why? Because a cowboy on a bucking horse was etched in black ink on the glass. i don’t remember any of the wording, but i remember that cowboy and that somewhere “Flagstaff” also was etched on the glass.

i was a cowboy nut. We had an 8mm movie of Hopalong Cassidy Daddy would show occasionally after some home made movies if my incessant demands wore him out. i listened to “Straight Arrow,” “Tom Mix,””Red Ryder,” and “The Lone Ranger” on the radio every chance i got. The backyard at 127 Castle Heights became the old west for the majority of time i played there, even though my wanna-be cowboy hat, and my double-holstered belt with my six guns must have looked a little strange when i only wore shorts in the summer. That glass etching inspired me even more. i imagined riding a bucking bronco in that cowboy heaven of Flagstaff.

In 1985, Flagstaff was in our plans coming back from Mayport, Florida to my final duty station in the Navy. We had pretty well stuck to our plan of not driving more than 300 miles a day, Okay, okay,  it’s almost 400 miles between Austin and Lubbock, and it’s a pretty miserable drive, and there’s not a lot in between. After a wonderful three days in Santa Fe, our plan was to stop in Flagstaff. But we changed when we realized, even though it was 374 miles, we had been on the road for twelve days and were anxious to get back to San Diego. We passed through Flagstaff. It was the worst decision we made on that trip, perhaps our worst travel decision ever. The ensuing drive was long and miserable when all the lodging in Phoenix was full and we continued to Gila Bend. Anybody who has stopped or even passed by Gila Bend will understand that.

My third exposure to Flagstaff was in 1989, thirty-nine years after my fascination with the cowboy glass. As a retiring commander, i agreed to be a chaperone for a tour of the west by a group of senior international officers taking an amphibious landing course at the Naval Amphibious School, Coronado where i was the director of leadership training for the West Coast and Pacific Rim as well as the lead facilitator for the Senior Officer “Command Excellence” two-day seminar. We had taken the Coaster up from San Diego and then transferred to an AMTRAK overnight to Gallup, where a bus took us for the rest of the trip. It was eventful: Canyon de Chelly, deep into Navajo land, my dinner with Tom Gorman, then we had a day and night in Flagstaff, mixing with foreign students at Northern Arizona U. before going on to other adventures and  back to San Diego. i was intrigued by Flagstaff, enough to look at real estate. Didn’t do it.

But i did make it to Flagstaff on Monday.

My studio apartment through Air B&B is just right for my purposes, my writing sojourn to somewhere. Alex and Celestina ensured all of my needs were met, and the studio with two outer rooms is perfect for three or four people (and a baby makes five) who need a overnight place to stay while catching all of the sites, like the Grand Canyon, of the surrounding area. And it’s just right for an old man on a writing sojourn.

Here is my patio, simple but pleasant. 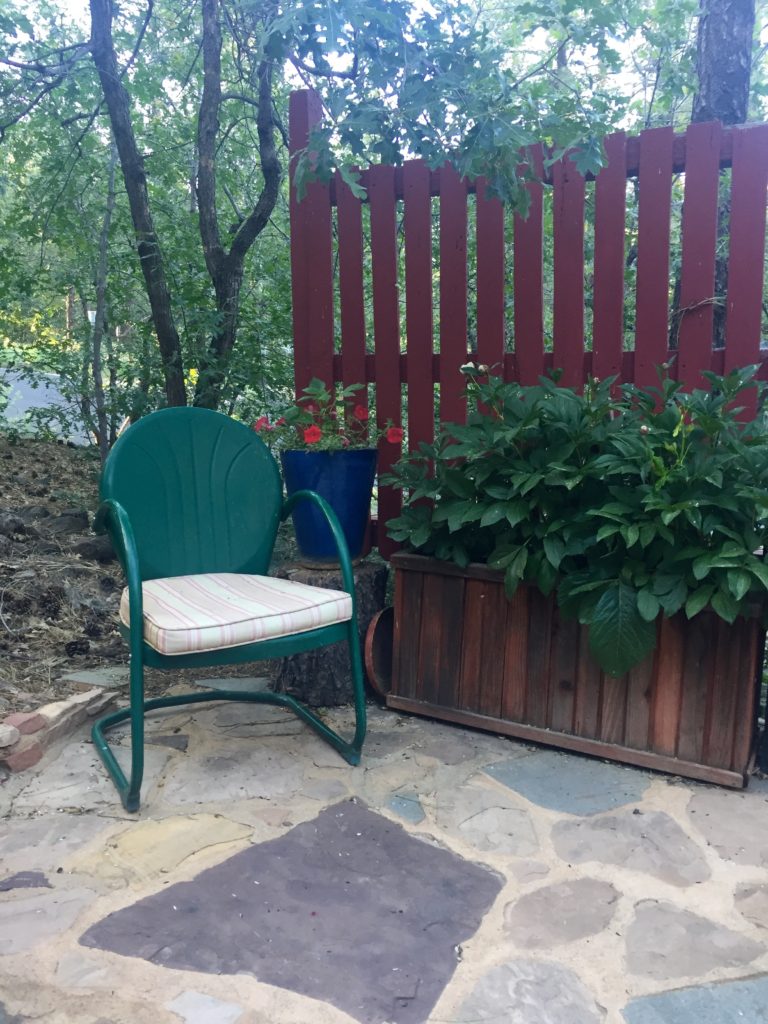 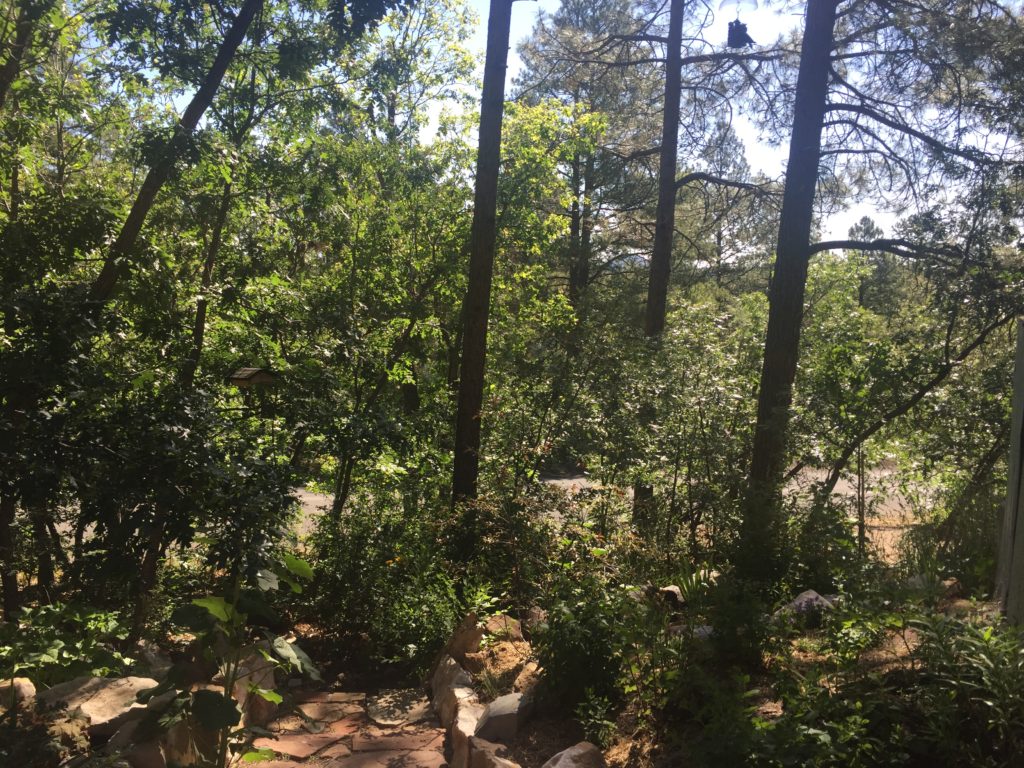 There are new friends here. This black cat came by almost immediately. i think he has a home but i don’t know whose. He likes it here because there are tempting birds and this squirrel he has his eye on. i call him Leopard. 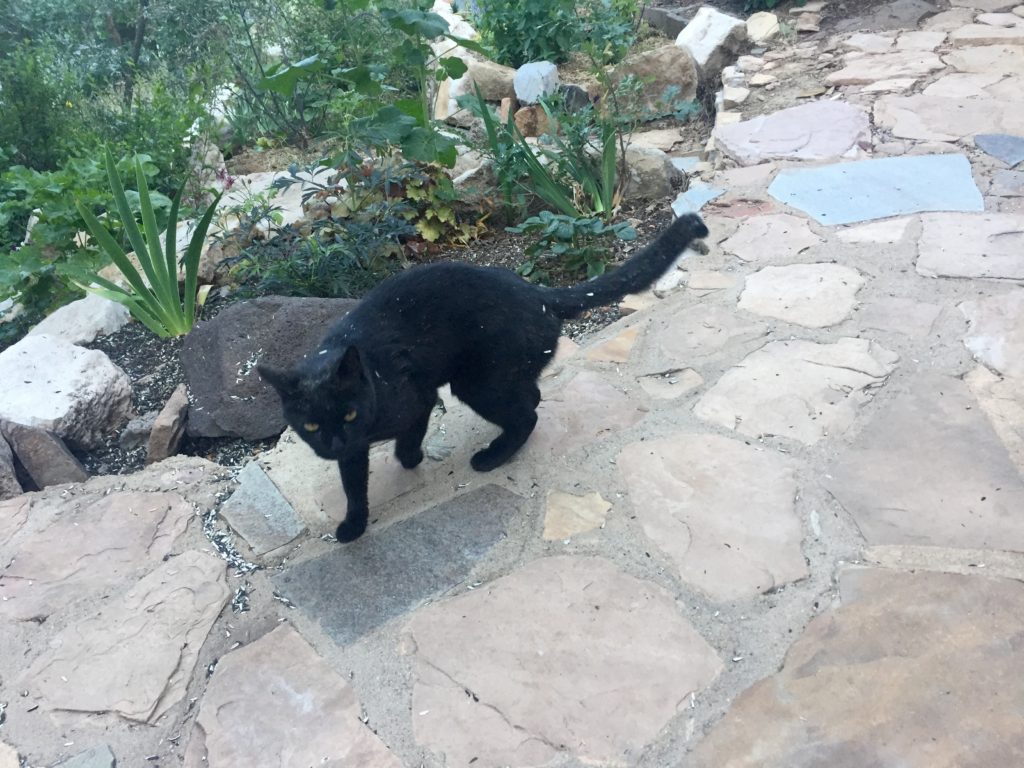 This is becoming much more of a project than i intended so i’m going to try and make it in installments so it’s manageable and not interfering too much in the sojourn to somewhere.