i’ve been thinking about a lot of things i think i would like people to think about. Those things just don’t make sense to me. But since i finally have recognized i’m an alien, i think they  might make sense to everyone else, and everyone else might recognize i am an alien…and at this time in our country, i could be deported to…somewhere else.

So i refrained. Then, tonight before the Padre ball game, there was this health insurance commercial. The ad boasted of having “no cost Medical insurance.” Now one might think that is a significant inducement. However, the Medi-Cal website provides this description: “Medi-Cal is a program that offers free or low-cost health coverage for children and adults with limited income and resources. If you qualify, you can enroll in Medi-Cal year-round.”

So if i got this straight, Humana is offering a free service for free.

Aliens, at least  this alien, just don’t get it. There are other things i don’t get.

A couple of days ago, i made an ill-timed trip to the strip mall up the hill from our house. The mall is conveniently(?) across the street from the high school and one building away from the middle school. i, forgetting about such things, went as both schools were letting out for the day.

It was not pretty.

i took note as i took my clothes to the cleaner. i parked in a remote but always available section of the parking lot. Children from pre-teens to high school seniors flooded the mall. None were going to the cleaners. But folks were fighting for parking spaces up front with available spaces about twenty feet away. Parents were parked in the middle of the lanes waiting for their children. i took note the ones who had found their children had formed a long line, possibly three or four light changes of a wait, to get out the main entrance. The cleaners was on the opposite mall end from where i parked. As i walked, i passed about thirty cars stopped waiting to exit.

During the walk, i probably passed at least one hundred teens and pre-teens. Of those, there were about a dozen boys. i was amazed. About ten percent of the young women had on shorts, some even had on short shorts with halter tops. i became glad i was in high school a long time ago. Of course, i went to an all-boys, military prep school. But if there had been high school girls dressed like that in my high school, my hormones would have blown the top of my head off (and i cleaned that up).

i figure all of these young women were from poor families. But what do i know. i am an alien. 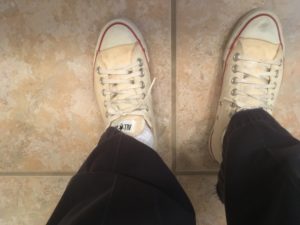 i also noted that about a third of all of these children had Converse All-Star basketball shoes on their feet. i did not realize so many youth played basketball. i got my first Converse All-Star basketball shoes during my first junior high basketball season (high tops). My second pair came in high school (low cuts). i have had a pair of low cuts in my closet ever since. i used them for basketball solely until i picked up racquetball. i then wore them for any court game, eschewing the new, more stylish, more cool, more healthy shoes that cost slightly less than the national debt.

i never had a foot injury. And i played a lot of pick-up basketball, and an uncountable number of racquetball games, even some squash. So the other day when i confessed to myself i wasn’t likely going to play any kind of court game in the near future, i decided to wear them while working on the house or in the yard.

i wore them outside one time. They felt wrong. Like they should be on a hardwood floor in a gym somewhere. i guess they had never been worn except on a court and just didn’t feel right. But all of those young ‘un’s had them on in the mall. Must have been going to play a pick-up game or court game later. At least they were getting some exercise.

i got in my car and, instead of heading for the main entrance, i went out the entrance close to where i parked and had to make a right turn only. i crossed over to the u-turn lane at the light everyone else was waiting for, did my u-turn and headed home while those other thirty or so cars remained in the parking lot. Waiting.

On the way home, i thought of how i walked to and from school throughout elementary school. It was just shy of three-quarters of a mile. At the corner of South Tarver and West Main on the morning of my first day at McClain, i turned to my mother and told her i could walk by myself from there to the school in the middle of the next block and i could walk home by myself. She said okay. i, my sister, and then my brother walked every day except for really, really bad weather every day.

In junior high, i rode with my mother, who was the secretary for the city school superintendent with offices in Highland Heights Elementary across the parking lot from LJHS. But every chance i got i walked home, usually with friends, male and female. The walk was about a mile and a half.

Castle Heights was just up the hill from home, not quite a half mile from our front door to Main. There were a couple of times when i had to go early for guard duty in bad weather when my mother would drive me (there is a great story about one of those trips). i walked.

Reflecting on that, i saw less than a dozen of students walking home as i drove back home, a mile trip. All the rest were going home in cars, mostly driven by parents. It wasn’t like that back when.

But then, i am an alien.