It is 2:56 a.m. Pacific Daylight Time, the dark side of three o’clock.

i woke up because it’s a tad warm for the Southwest corner. i tend to wake up once or twice a night because of old man things, but i’ve always been a great sleeper and nearly always go right back to sleep. i don’t consider myself “great” at hardly anything, but i am a great sleeper, always have been, got it from my father…but he was better. i mean anyone who in ’34 and ’35 could go eat lunch at Homer’s in the northeast corner of the square and then walk back to Philpot Motors a block off the square at North Maple and West Main before Philpot sold the business to the McDowell’s which became McDowell Oldsmobile and Cadillac or vice versa because i can’t always remember things exactly as they were, which is another old man thing, but anyway as my mother used to say when she wanted to let you know she had finished her aside and was returning to her original thought, my father would go to the lot behind Philpot’s where there was a big flatbed trailer parked just across the corner from the mule barn where West Market Street tees into North Cumberland and he would climb up on that flatbed trailer and go to sleep for whatever time was remaining and he slept hard but knew the mule barn, which was where Taylor’s cleaners and the feed store, which is Edwards Feed now and i think it was then, i mean before it was the mule barn, when i was growing up if i remember correctly but there goes that old man thing again and i don’t wish to sound like i’m really old because i’ve been blessed with good genes and am in better shape or at least have less body parts replaced than just about every man i know in my generation so i’m not complaining but i am old and that’s just the way it is, but anyway, mother again, my father would take his nap lying on the top of that flatbed trailer knowing the mule barn’s whistle would go off just before one to let the mule workers know they needed to get back to work and my father would wake up, climb off that flatbed and go back to the garage part of Philpot’s long before they called them service areas and certainly not service departments and he would work like a dog for twelve dollars a week.

Anyway, i woke up. Unlike most of the time, i couldn’t go back to sleep. Thinking about things. All sorts of things. Like most of the stuff i just wrote down above. But many more like why i haven’t finished that book or for that matter the five or six i keep thinking i’m going to write but never finish, at least not to my satisfaction, and i think about all of the things i’ve done wrong in my life, and on the short side of seventy-four, there are one hell of a lot of things i’ve done wrong in my life and i wonder why in the deep of night when i wake up i think about the wrong things and not the right things i’ve done because i think i’ve done a number of those as well, but it’s always the wrong things i think about in the middle of the night, and another thing that makes me wonder is how come i keep thinking about those wrong things i have done when there is not one damn thing i can do about them now, especially not at this time of night.

And then i wonder why i write even though i know i don’t have a clue why i write. It’s just there, this writing thing, and quite truthfully, even though i can’t seem to get this book finished, i can’t stop writing even though i would probably be happier if i just did the chores, the tasks around the house you know, and played golf. And i could, you know: i’m old, retired, can do anything i want so i get up in the middle of the night and can’t go back to sleep because i’m thinking about all sorts of things and yes, i write.

Maybe it’s because i’m stoked. Crazy. You see, i cooked dinner last night. That’s a rarity. It’s also crazy. i used to cook dinner quite a bit when Maureen was working and i was mister mom and even beyond because i wanted her to rest after a long day at the office until i discovered it was her way to relax, to take work off her mind, and she loved to cook and since she saved her earnings at the movie theater and Kentucky Fried Chicken long before they changed it to KFC because they had real chicken back then, her earnings over and above the amount she needed to take her summer trips to Europe so she could buy those stainless steel pots and pans, a set that we still use today. Then she retired and cooking became a passion for her and she has turned into a gourmet chef and i get high end restaurant dining every meal. Yes, every meal. Even breakfast.

So why the hell am i cooking? Since she retired, my cooking has been restricted to grilling steaks, hamburgers, smoking the Thanksgiving turkey and a couple of favorites my mother used to make like meatloaf and a squash casserole and biscuits and cornbread with something i made up on my own with okra but turns out to be a lot like jambalaya, which hacks me off because i didn’t know it was jambalaya and it really isn’t because whoever heard of jambalaya having Tennessee Pride Country Sausage (HOT) included.

But anyway, i’ve got this friend. Great guy. We reconnected and probably never would have had not somebody other than Al Gore invented the internet. He, my friend not Al Gore, lives in south Georgia. His name is Jimmy Nokes. We grew up together. We learned to play golf, such as we played it when Hunter’s Point Golf Course opened. We played with Henry Harding and Fox Dedman and they were a bit better than the two of us and Nokes would get to the fifth hole (i think: old man stuff again) where a small pond was in front of the tee box and the hole ran along the barbed wire fence on the west border of the course and he would hit his ball into the pond although that pond shouldn’t have come into play at all, but it did for Nokes and he hit his ball off the fifth tee into the water about a dozen times until one day, he hit a line drive, a slice to the right, but it cleared the pond and Nokes was beginning to jump up and down with elation when the sliced ball smacked one of the barbed wire fence posts and bounced back…yep, right into the water.

And on weekend nights, usually Saturdays we would go to his house on the lake, somewhere out on Mann Road or just off of it near Brunley’s Branch of the river if i remember correctly, and we (Nokes, Fox, Henry, and me and Marty would take care of all of us like little boys which we were even though we were into our twenties by then) would play penny ante poker into the middle of the night and eat pizza and drink coke. 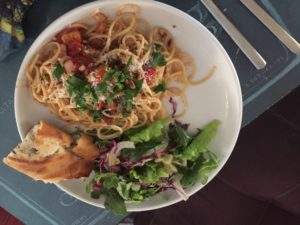 So Jimmy Nokes sent me some Navy stuff he had. Mementoes. And when i complained about not having a Souvenir, the 1962 version of the Lebanon High School’s annual, he sent me his, and then maybe he read about my recollection of Vidalia onions and so last week we get this box of Vidalia onions and Maureen made one of her gourmet dinners and asked me to send Jimmy a photo of her gourmet dish with his Vidalia onions because she loves, absolutely loves Vidalia onions, which she discovered during our first year of marriage in Ponte Vedra Beach near Jacksonville back several eons ago and so i did her one better by including the photo here.

But i didn’t take a photo of my dinner last night. Too busy. i got this idea and told Maureen i wanted to cook. She acquiesced, to my surprise, and so i looked up this recipe. Actually, i just typed in “Vidalia onions and tomatoes” because i wanted to use the tomatoes from our garden. It was something called “Grilled Walleye with Vidalia onions and tomatoes.” Perfect. Except there isn’t any walleye anywhere around here. So i go shopping and find some Pacific rockfish, which i would guess looks  a lot like walleye except i don’t remember what walleye looks like but hey, it’s a fish, and i come home and get out the recipe and ignore it except for the hushpuppies. As with all things cooking, or at least my cooking, i just started and grabbed stuff i thought sounded good with fish, Vidalia onions, and tomatoes. i stress “sounds good” because i usually don’t have a clue what all those spices actually do to the taste of food.

But it worked. Very well, thank you. And the hush puppies? It was my first time with hush puppies. i’m good with biscuits and cornbread, learned from my mother. But they were really, really good, not of course, good like Whitey’s Fish Camp on Doctor’s Lake off of the St. John’s River southwest of Jacksonville, but in fairness, my grease was corn oil, not some concoction Whitey has in big vats and changes once a year whether it needs it or not (Thank you, Bill Prichard).

And that’s my story. It worked. i am tired now and will go back to bed and go to sleep. i’ve stopped thinking about things.

And thank you, Jimmy Nokes…for the Vidalia onions and being a friend even after about a gazillion years.

1 thought on “Dark Side of Three”