This past Sunday, Eleanor Hicks ran the Bay to Breakers run in San Francisco. 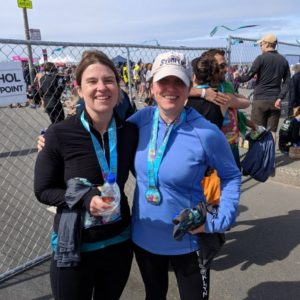 Eleanor is one of my favorite women of all time. The daughter of my Vanderbilt friends, Alan and Maren Hicks, she is an attorney for Google. She is also astounding: a good athlete, an adventurer, one of the smartest and caring people i know, and perhaps one of the best read people on earth. She is as much a daughter as a friend (Eleanor, i purloined your photo off of Facebook).

Bay to Breakers is the longest running run (pun intended) in the country. The first one was in 1912 with 218 entrants, 186 runners who showed up, and 121 finishers. And so it began. It routinely has 50,000 plus running. In 1986, it peaked at 110,000. It begins on San Francisco Bay, near the Embarcadero runs up the hill on Howard Street, takes a jog on 9th Street and another jog on Hayes Street. It is pretty much down hill from there going through Golden Gate Park to the Pacific Ocean beach. 12K run. 7.53 miles.

Of course, as usual, i didn’t have a clue what i was getting into. i was the weapons officer, aka first lieutenant on the amphibious helicopter carrier, USS Okinawa (LPH 3). Master Chief  ETCM B.R. Kellish and Senior Chief NCCS Woody Brown came up with the idea.  The master chief was from San Francisco and both were highly rated California marathon runners. The two of them were responsible for organizing many runs in San Diego. Then they came up with an Okinawa team running in the Bay to Breakers.

CWO-4 JD Waits, my co-conspirator in many scams, and Major Lou Rehberger, the Marine Air Ops and a constant running companion with JD and me, considered our options. We announced it would be a go for us.

i flew up in the ship’s CH1 Huey helicopter. Rehberger was the pilot. i was the qualified right seat safety observer until we picked another Marine pilot at Pendleton. There were five of us and the crewman. BR, Woody, JD,and a couple of others met us for the run.

We all put on running shorts, white USS Okinawa singlets, some wore Okinawa ball caps, and all of us had secured a toy helicopter on top of our heads with a large rubber band. We thought we were dressed well. But the gamut of costumes and floats driven by runners were incredible. So we were a bit embarrassed. The run started at 8:00 am. We got there around 7:15 and were so far back from the starting line, we didn’t cross it until around 8:10. As the run started, those who had dressed warmly for the San Francisco cold mornings shed their outer garments and threw them in the air. Clothes were hanging from every electric, phone and light line for the several blocks before we reached the starting line.

We were moving at a fairly decent clip but kept noticing there were a lot of runners drinking beer. One of the guys had tucked a twenty in his running shorts so when we hit the Ninth Avenue and Hayes street jog, we veered right into the market on the corner. We bought a six pack of Miller Lite and returned to our run.

As we emerged from the market, a party passed by us. Apparently, there had been a formal event the previous evening. About a dozen of the party goers showed up at the start in their tuxes and evening gowns and were making the run. They all had champagne glasses and about four of the guys were toting magnums of champagne. When they spotted us, in unison they yelled, “You mean you are drinking light beer?”

As we approached the Haight-Asbury district, speakers were hung out seemingly every window and the music was bouncing everywhere. We passed a runner who was wearing an overcoat. As we went by, he opened the overcoat. He had stuffed a woman’s stocking with cloth and affixed one end into his pants, the stocking fell down as if it was his business. We were at first stunned until we realized it was a stocking, not what we thought.

The rest of the run went well.  We had another beer and agreed to run the next year.

That’s when it became complicated.

I was disappointed JD could not make the next year’s run because of a schedule conflict.

BR and Woody decided to do it up right. BR asked his family members who still lived in San Francisco if they would like to participate. Several were excited to do so, but one niece said she would love to but she wasn’t a runner. That’s when the idea hatched.

The two chiefs made a small wagon out of plywood and a child’s toy wagon wheels. They attached a swing chain to the front with chain harnesses for four runners. On the wagon they put two lawn chairs and a large cooler up front. As this was progressing, i asked my fiancé Maureen if she would like to join us. Not being a runner but a trooper, she said yes. The lawn chairs were for BR’s niece who would not run and Maureen who could hitch a ride if she decided not to run the entire race.

We flew up and met our other runners and carriage about the same place, several blocks from the starting line. BR had donned a super hero costume of tights, colorful shorts, and a long-sleeve thermal underwear shirt with “Captain Ugly” painted across the chest of the shirt. He had added a curly red wig. Perfect.

BR’s niece came in a black gown and sported a calla lily. She regally established her royal presence on the cart’s lead folding chair. Maureen, after sitting in her chair while donning her running gear, then began running rather than sitting in the chair. She never sat in the chair again. Four of our runners, including me, slipped into the swing chain harnesses. There was a plan for us to switch out occasionally for breaks, but somehow Rehberger and i were always two of the mules pulling the wagon the entire seven and a half miles. There were lots of strange rigs, some elaborate, in the race, but we certainly got our share of attention (As i recall, the number of runners had swollen to 60,000 from the previous year).

With all of the ridiculousness involved, one task had not been worked out: who was going to bring the tow mules their beers? Maureen, being the caring soul that she is ended up being  the beer hauler and ended up running more than anyone else because she was constantly running back and forth between the cart’s cooler and the runners. i knew marrying her had been a superb decision.

As we entered Haight-Ashbury again like the previous year, there was this guy in an overcoat again. When i spotted him, i yelled for Maureen to check him out. Sure enough, as we got close, the guy, who was also sporting large sunglasses, opened the overcoat and out flopped the stuffed stocking. At first, Maureen gasped at the sight. Then she realized what the stocking actually was and laughed all the way to the finish line.

About then, we began to have a problem, the toy wagon wheel’s tires began to smoke a bit. They had been rubbing against the plywood sides of the cart and the rubber was overheating.

Maureen took on another task. She opened a can of beer and poured it on the smoking rubber. She did this with a couple of beers. We were alarmed. Not that the rubber was burning, but afraid our beer supply might not last. At about the five-mile mark, the last of the rubber had fallen off and we were pulling the cart with metal hubs for wheels.

Undeterred but significantly slower, we continued to pull the cart with the princess niece still aboard.

The last half-mile was a challenge. We had reached the beach and the remaining distance to the finish was through beach sand. It would have been tough with rubber wheels, but the metal hubs made it even tougher. As we swallowed down another beer (or two), we refused to quit towing. After all, we were stubborn mules. It was a slow run. Completely worn out, we crossed the finish line amid cheers.

Gasping, we got out of our harnesses and waited in one of the twenty or so lines to get our tee shirts. Maureen and i both were gassed, but we were proud of ourselves and laughing at the exploit. That’s when we discovered the guy in the overcoat was right behind us. He turned out to be a great guy and we laughed all the way to the tee shirts where we bid each other a fond farewell.

We found our other runners and someone asked where were our cars. Well, with about 60,000 people on the beach, parking was at a premium. Our transportation was over a mile away. So the spent runners/towers/beer deliverers of Captain Ugly’s bunch trekked one last time to our cars.

BR suggested we stop at one of his old haunts for lunch. The tavern was a great place and somehow all of us began drinking salty dogs. Not a good idea.

But it was over. We said goodbye as we left the bar. Lou, Maureen, and i went to one of my favorite dining places of all time, Pacific Cafe on the third level of the Ghiardelli Plaza. It had great fresh seafood and the back of the bar had an arched window, like an oversized version of what was in the Perry Mason television series, looking out at San Francisco Bay with Alcatraz right in the middle of the window. As with all good things, the Pacific Cafe is gone, replaced by condos and business offices.

After our dinner, the three of us got to the airport on time to catch our flight back to the Southwest corner.

Tuesday, friends in San Francisco informed us we had made the the headlines in a sidebar of The San Francisco Chronicle’s coverage of the race: “Captain Ugly’s Team Was Well Received.” That’s the best i can remember the headline. Somewhere in my pile of stuff, i have a copy of the story. If i ever find it, i will post it here.

If you don’t believe me, here’s proof:

And Eleanor, i hope you had as good of a time at Bay to Breakers this year as we did in 1983.