i’m back at the grill with a cocktail. Two days in a row. i could do it every night i think.

Like i used to do at A&M, Texas that is. Late Seventies. Divorce pending or done. Same thing. Bought her a condo for her and our daughter. Sold the big house and then, thinking it was a wise investment, bought a smaller one. Nice place. But not a good investment.

Still it was mine and being single when i got back from my NROTC office, i took up running seriously. Well, serious for a guy who was never really very fast, nor ran for very long. But i’d get home, feed the Olde English Sheepdog “Snooks” named after my uncle, and the cat, a three-legged, 17-pound terror and one of my all-time favorites named “Shore Patrol.”

Then i would change into my running shorts, tee-shirt, and sockless $17 Adidas i found at J.C. Penney. i hit my route for somewhere between three and five miles, come home. i would put on a baked potato in the oven and light the hibachi, a wonderful cast iron contraption that folded up to make a flue to speed up the charcoal heating to hot, hot, hot.

i would finish the shower, dress, lay out the hibachi for grilling and pour either a gin and tonic or Mr. George Dickel’s 12-year sour mash with one ice cube, and sip while the steak grilled and i put together a very, very simple salad and put the bread in the toaster.

i’d pull off the steak, put it all on my kitchen/dining room table and eat a sumptuous meal with a modest red wine while Snooks and Shore Patrol hung close by with ravenous looks with no luck. Oh okay, i would always give in at the end and give both a little steak remnant.

Unless i was going out that evening, this was the routine. The routine would be interrupted by sharing special time with a beautiful young woman, a really neat lady named Judy McConnell who was one of the first female Aggie grads and then a psychologist for the university. And then when i was lucky enough to have my  daughter Blythe stay with me, and then, all bets were off. Blythe was the center of my universe.

i remembered all of this as i tried to corral the temperature of the runaway egg grill knock off for the pork loin Maureen had prepped for my afternoon outside.

To brag a bit, this is the Southwest corner. The weather is about perfect. The temperature is holding a couple of degrees below 70. There is a slight ocean breeze, and there is not a cloud in the sky. Reverie.

This evening, i did not put my ancient iPod — okay, okay, ancient by today’s standards — on “scramble” as i usually do to listen to my potpourri of almost all kinds of old genre’s. No hip hop or rap here. As the grill heated up, i went to one of my favorites. Years ago, when she was young and i wasn’t as old as i am now, Blythe gave me a six CD anthology entitled “The R&B Box: 30 Years of Rhythm & Blues.” When it comes to music, Blythe understands me well. This set starts in the 1940’s and goes through the 70’s. My music, especially the 50’s and 60’s when i cut my teeth on WLAC’s late night blues and the heyday of Motown and Ray Charles. i know many of them by heart and sing along. Softly, so hopefully no one can hear me, cause i don’t sing as well as i used to and it seems a little silly when i think about it.

So i’m listening to Aaron Neville’s “Tell It Like It Is,” one of my all time favorites and thinking about stuff as the grill continues to heat. i realize this was one of the songs i played as a WCOR dee-jay and how my “Top 40” weekend shows heavily favored rhythm and blues and even blues, probably a bit too much for the teen audience and not enough country for the older folks in the limited listening area. Didn’t care then and don’t care now. Great music. Makes me move. Like Gene McDaniels “100 Pounds of Clay,” which strangely is not in my collection.

So i kick back and look at my world, which has gotten quite a bit smaller over the last ten weeks, and think i need to make sure i don’t whine about all the crap we manage to foist on ourselves with hate and anger and hyperbole and thinly veiled prejudice. i got it pretty good.

i’m looking at one of two of our coral trees as the coral blooms are giving way to green. This particular tree is my favorite. It was challenged and not only survived the challenge, it rose to new heights. But that is another story for later in the Southwest corner. 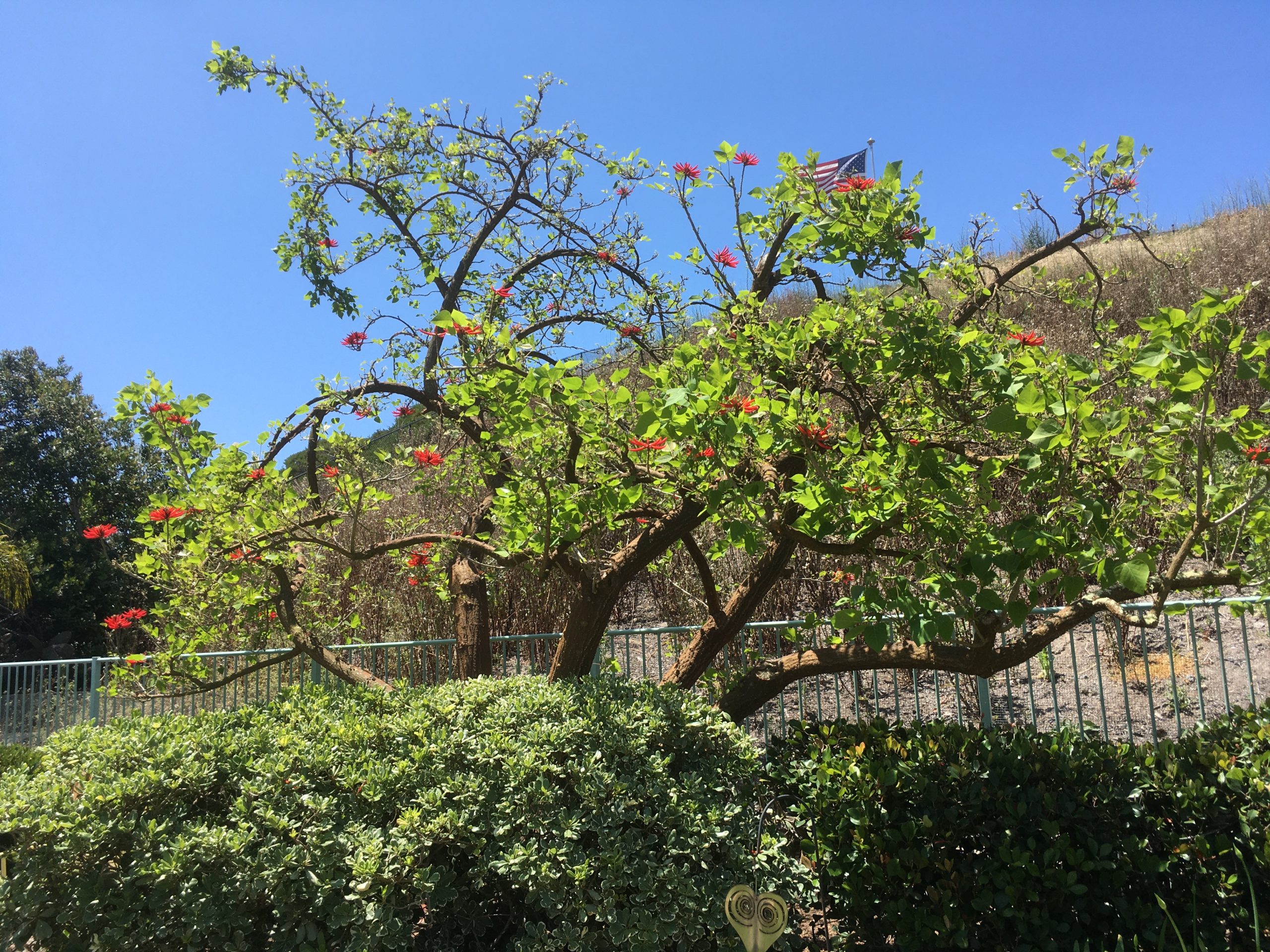 1 thought on “Another Southwest Corner Afternoon”