Maureen is in her usual place, lying on the love seat with one cat snuggling by her side and the other on her legs. She is purportedly reading but there is really more sleeping going on. She will soon give up and go to bed.

It has been one of those special evenings for me, quite accidentally i might add.

Today, i reengaged with fitness, of my determination i should qualify. i tired of being a slug. At some point about two months ago, i said the hell with it. After all, i’m 73, not an old 73 but still 73, ancient. i should be able to do what i wish for the remaining years. Right?

Then i thought about some things. My parents lived to just shy of 99 and 97 respectively. Good genes, right? But i have lived a much wilder life than they and don’t expect to make it to their age. However, my goal is to make it to at least 85. i want to see my grandson Sam graduate from college. Since i have been wilder, i need to work on lasting more than Mother and Daddy ever did.

Then, there are my friends and me. Several have had some major procedures concerning health issues in the last month or so. My concerns about my condition have continued to prove minor. i am about the only one of friends my age who can still run, albeit rather pitiful to how we all used to run. Dammit, i owe it to them.

So in the last two days, i started running again. Sort of. In my last Navy tour, i ran at lunch, from the Naval Amphibious School along Coronado’s beach to the security fence of North Island Naval Air Station. It was about a 48 minute run, roughly six miles. i did that every weekday from early may 1985 until the end of November 1989.

It was a good run: full of life, enjoyment.

So i decided to work up to running 48 minutes. Today, i ran (my interpretation) for 11 of those 48 minutes. Oh hell yeh, it’s only about half the distance i used to cover in that time. But so what? i’m 73. Feeling good. Oh yeh, oh yeh.

Then i worked on packing and arranging for my trip home. Yup. This is my home, but Lebanon, Tennessee is also my home…forever.

This evening, Maureen and i chose to fix our own fish we had bought at “Blue Water,” an incredible sea food diner and deli. Maureen chose sea bass. i got opah. She did one of her magic cooking jobs on hers. i did some swags on the marinade and grilled mine.

i grilled it in our new “egg” knock off.  We bought it about three months ago. It’s magic but requires me to cook rather than my previous guess and by-golly approach to grilling. i eschew any grilling without charcoal. If i’m not grilling with charcoal, why not cook inside?

It was a lovely twilight. Grilling fresh opah, one of my favorites. My world behind me, ahead of me, here right now. So i gave in. A martini with JJ Cale as the opah grilled to its glory. 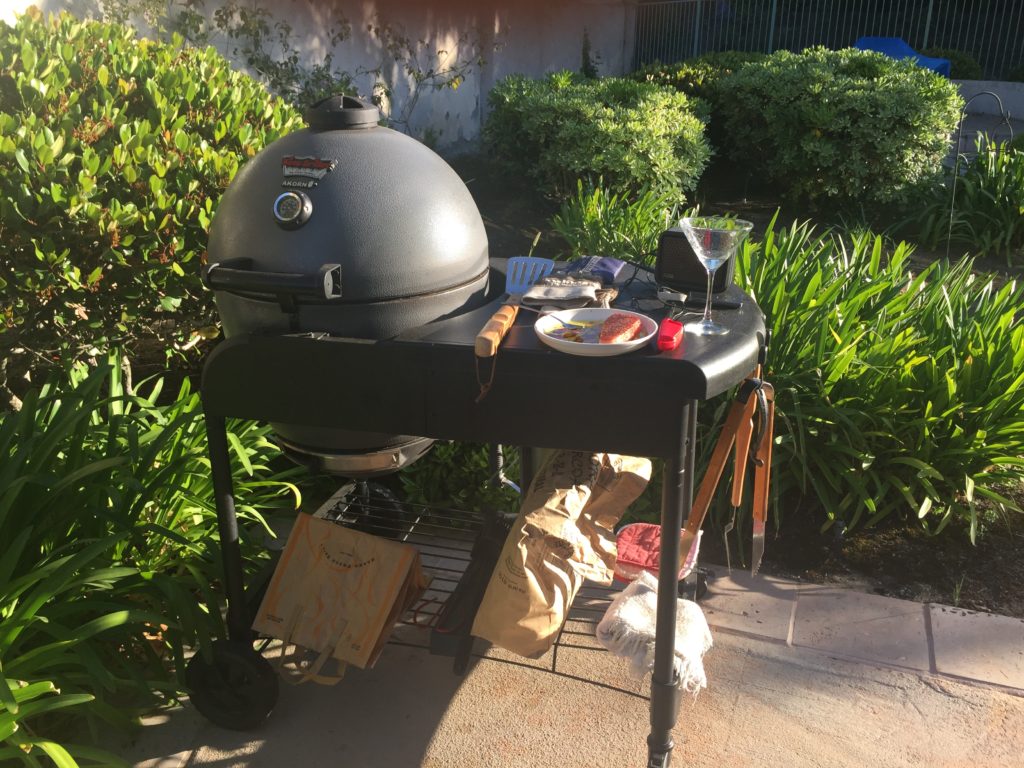 As usual, we ate on dinner trays in the family room.

i had recorded the playoff in this weekend’s golf tournament. We watched. It was rather anti-climatic. But we enjoyed. Maureen even liked a taste of my grilled opah. We shared the Lanzarote. It’s a rose wine from the Canary Island of Lanzarote. We bought it at the wine tasting last Thursday in San Francisco. Thanks, Alan Junior. The meal was about as good as it gets for an evening meal. The wine was perfect, and i’m not a big fan of rose. 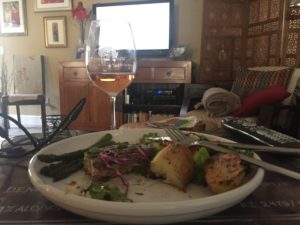 After the golf, we watched the end of the second Sherlock Holmes movie. Maureen decided she didn’t wish to hear bad so we didn’t watch the news, not even PBS. i’m all for that all of the time.

We turned off the television. i put Dvořák’s 9th, the “New World” Symphony on the portable whatever it is connected to my invaluable iPod. It is one of the few pieces i could hear over and over and over…again and again and again.

When Anton’s piece concluded, i took the whatever that new technological magic is into our bathroom to shower. i put the selection on shuffle. i finished the evening ritual and came back to this infernal computer. But i continued to play my iPod.

It occurred to me i have learned to appreciate all kinds of music. Tonight, i listened to JJ Cale, Dvořák, the Carter Family, Andrea Bocelli, Charles Mingus, Flatt and Scruggs, and Joe Williams. It’s pretty nice to be without prejudice.

Tomorrow afternoon, i will head for Tennessee. Nine days back home. i cannot wait to see my friends, visit places so dear to me, relish Tennessee May.

But as i sit here in the final hours of a Southwest corner day, i have to admit, they just don’t come much better than this.

i hope your day was as good as mine.