As noted, yesterday’s zoo trip gave me the opportunity to be described by Kim Novak. With a storm predicted for most of the day in San Diego today, we planned a mostly indoor day with Alexandra and Happy, granddaughter and grandmother Martha.

So a bit later to miss the rain snarling of an already snarled San Diego commute, we left home a bit later. It turned out the raging rain storm was less than a quarter inch in the early morning with the clouds burning off by noon. Typical. But on we went to Balboa Park.

We had Allie’s visit planned out, but the plan had some holes in it. Trooper Allie made it through the first day at the zoo, but we only saw about half of what she wanted to see, and logistics prevented one goofy yahoo from getting to Albert’s, one of my all time favorite places to dine in the middle of the zoo, named after the zoo’s past famous gorilla. The other must stop was the Zoo’s “Safari Park” which is about forty minutes up the road inland of Escondido, which is inland of Encinitas, which is…oh, never mind, i got off track again. Anyway, we moved that visit around to Friday to ensure we missed the big storm, which never happened.

Then, i suggested the Reuben H. Fleet Science Center on the east end of the Park, across from  the Natural History Museum with the big fountain almost in between.

And that’s where we began today’s adventure. 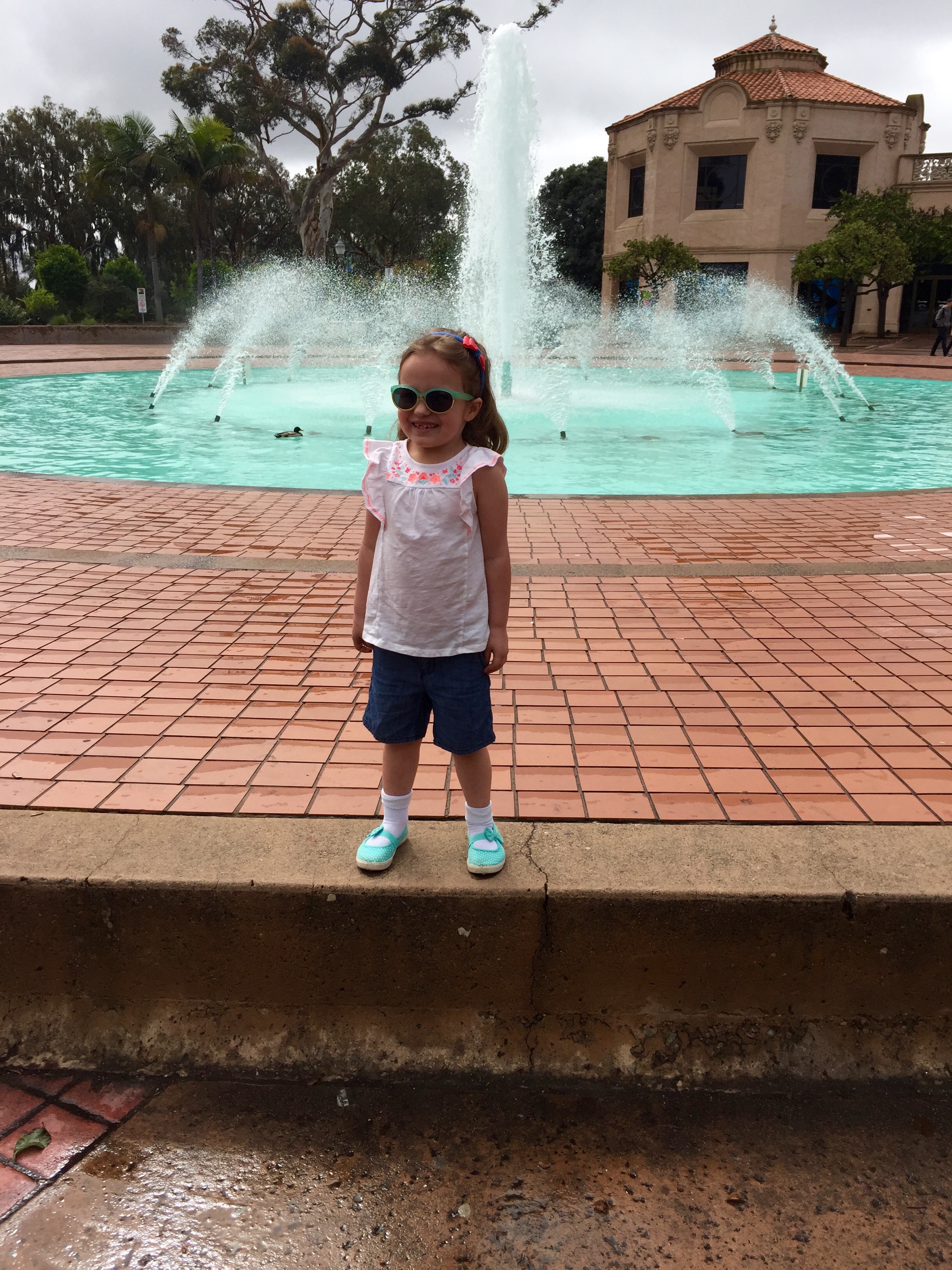 It turned out the Science Center was a perfect place for a five-year old and a significantly older and very tired playmate. Allie loved it. We tinkered with the science education projects with inquisitive Maureen leading the charge, Happy being the effective teacher she has been all her life, and the goofy guy unsuccessfully trying to figure out the exhibits kids of all ages had mastered within a minute.

Then we went upstairs to Kid City. Allie was in heaven, along with about two dozen kids flitting about the air tubes, mock-up bus and fire engine, the “Mercado” grocery store and the factory next door. This, of course, allowed most of the adult escorts to sit down. Allie played until our group got hungry. 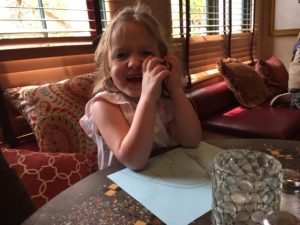 So we walked down El Prado to The Prado restaurant. Allie loved it, and the adults enjoyed their lunch and rest. The goofy guy had a glass of pinot grigio. So, at Allie’s request we went back to Kid City. This time, the goofy one was designated to be the playmate. Allie and i made the rounds. For most of the time, the air vacuum exhibits with the balls swirling upward in and around the Rube Goldberg contraptions before falling down a tube into a bin to be repeated thrust into the tubes again held sway.

And then it happened. While checking out the “walk” and “don’t walk” exhibit for crossing the Kid City highway of life, there was this three-year old rolling his Mercado thirty-inch high shopping cart at pedal to the metal speed (except, of course, there was no metal). The wipeout was pretty ugly. There were no serious injuries other than the goofy guy’s ego. The photo to the left is the evidence at the crime scene.

Fortunately, the wreck on the highway was near the end of the adventure because the beginning of a non-adventure called rush-hour was fast closing in.

As Allie’s entourage was gathering, the goofy guy walked out to the fountain and found a soul mate. One lone male mallard duck had claimed the fountain. The goofy guy and the

duck discussed the state of the world, speeding plastic grocery carts on main highways, and independence. The two agreed neither of them was really lonely.

Allie, Happy, and Auntie Mo emerged from the museum. The entourage made it back home with minimal problems with the commute.

“Girls Only.” Fortunately, he was designated the “helper” and could traverse much of his home, but just in transit or when helping. He, as a playmate was blissfully extricated from a game of “Old Maid” because three players were required. But he lost in “Go Fish” yet again, although this time, there was some consideration in his claim the officiating was awful. Then, after Allie had finally, peacefully, and lovingly bit the dust for the evening, and Happy and Auntie Mo had retired, the goofy one, the helper found this note (to the left) on the table beside his favorite chair.

The rain decided to fall only at nightfall, like tonight. Tomorrow, the gang hits the zoo again for all the animals missed on the first day (with a very weak promised from Happy and Auntie Mo lunch would be at Albert’s). Friday, the planned visit to Safari Park is a lock.

But tonight, the goofy one, although even more resembling Sister Lila marching on that railroad track, is happy with a full day as Allie’s playmate and helper behind him and the assurance he still has at least one place to rest in his home.