It was her idea. Really.

We were at Hanaoka’s Saturday night. An early Father’s Day outing. The best gyoza ever. Anywhere. Their sashimi plate is my go to. Been that way for about thirty years. She and her mother asked me to pick a place for Saturday night. She was scheduled for a boat ride with friends the next morning.

While she and her mother discussed what movie they might see when she got back from boating, i was excluded as they know i’m not a movie going fan unless it’s one i really like (and they are very, very few unless they are old, like me). They brought up “Ocean’s 8.” Maureen admitted she had already seen it. i prodded Maureen could go again because she liked it. But they agreed on “Incredibles 2.” i surprised them when i said i wouldn’t mind joining them for that one. A bit stunned, she recovered and reserved our seats in The Lot, a movie dining/movie experience in Liberty Station at the foot of Point Loma.

So Sunday, the appointed date for Father’s Day, Sarah hosted Maureen and me for a second outing. i loved it. i didn’t eat food but i did have a .394 IPA. That’s the IPA made by AleSmith, a San Diego brewery in conjunction with Tony Gwynn, Jr. honoring his father’s batting average the year his pursuit of hitting over .400 could have — and i believe, i believe he would have reached Ted Williams’ status. But that’s another story. The movie was enjoyable. The fact Sarah wanted to treat us made me feel about ten feet tall.

Since i don’t go to movies and only watch my favorite ones from the past on television, i should not be considered a critic. But i liked the tongue-in-cheek fun of the “Incredibles 2.” It was fun to watch. And the theater was cool. Perhaps when i turned onto Truxton Road just past the Marine Corps Recruiting Depot, MCRD, or “M-Crud” as we Navy folks call it, was when i got into what this area used to be.

For those who are not familiar with San Diego, the Navy Recruit Depot, San Diego covered this large and valuable piece of land on the waterfront. About half of the recruits in the Navy were trained here. If you saw the movie “Top Gun,” Tom Cruise and Kelly McGillis drove the sports car through what was then the main gate of the base where Tom’s squadron commander, Tom Skerrit, supposedly lived.

Then the budgeteers and the politicians all got together to commence “Base Realignment and Closure” (BRAC) beginning in 1988 and whacking and pasting bases through five iterations, which changed the face of San Diego (and other places as well). With the misguided aplomb politicians, including top military brass, seem to boast about, they closed the recruit depot here and the one in Orlando and moved all of the training to Great Lakes. i guess they thought there was an ocean there instead of Lake Michigan, and that the weather north of Chicago was more hospitable for training than the Southwest corner. Go figure…oh that’s right, it was politicians involved — they also put Marine Aviation at Miramar (where “Top Gun” the movie was filmed, and moved the Navy’s crack fighter training to Nevada, obviously because Nevada is so much closer to the ocean and Navy carriers than San Diego…oops, forgot: politicians.

Regardless, the development men frothed at the mouth and moved in on what had been the Navy Recruit Training Center, San Diego. Actually, they did a pretty good job. There is some housing development, but the attraction is a lot of neat places to go like the “Stone Brewery World Bistro and Gardens:” big place, good food, nice atmosphere for a big place, and beer, lots and lots of all kinds of beer made by…yep, Stone Brewery. Among many other attractions, there’s The Lot. 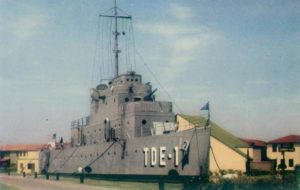 In the back of my mind, i was missing the recruits marching; the USS Recruit, actually used to train the recruits about Navy ships with the major exception of going to sea. It’s still there, but just a toy now.

i enjoyed the recruits being here. One of my best memories was in 1982. A bunch of single officers in the USS Okinawa wardroom, including moi, decided for a late night adventure to visit Crazy Eddie’s Booby Trap.

Crazy Eddie’s was just like you would think a place called Crazy Eddie’s Booby Trap would be. It was a dingy bar and a strip joint with greasy cheeseburgers. The joint’s big calling cards were the strippers (obviously) who also served the burgers and beer and then stripped to country music. Go figure. For some reason, it attracted all kinds of men. i enjoyed going there for the people watching. No, not that kind of people. i’m talking about the other men that attended: Old biker guys with chains hanging off their black jeans, silver chains holding keys, tools, and old car bumpers, big chains; men in $1,000 business suits with pointy-toed shoes and slicked back hair; old men in Irish tweed caps, white shirts, and khaki pants with suspenders; all kinds. And they all got along just fine, swigging their beers, smoking cigarettes, and watching the women, laughing with each other.

But my favorite happened that night the Okinawa officers were out to just enjoy themselves. We were standing in a small area to the side. i sidled up to the square bar seating with a dance stage in the middle because the waitresses…er, strippers were quicker to serve there. George Jones singing “White Lightning” was blaring at top decibels from the sound system. i wedged my way between some old guy and a very young sailor sitting at the bar to order a Bud (this was before “craft beers” and our standing position did not seem adequate for a pitcher).  An older man in a wrinkled polyester suit sat on the other side of the sailor. He spotted me.

“This is my boy Johnny,” he proudly and loudly boasted over George claiming his “daddy kept a cookin’…whoosh, white lightning” and the young lady on the stage lost another piece of strategic clothing.

“We’re from Indiana” he explained, “but came out here for Johnny. He graduated from recruiting school today,” he beamed.

i rendered what i thought was the appropriate congratulations.

Finally, one of the young ladies asked me for my order. Johnny’s father looked at the skimpily clad waitress and asked, “Miss, would you mind bring us another couple of bourbons and coke, please?”

Taking the order, she provocatively sashayed away. Johnny’ dad slid a ten-dollar-bill into his son’s hand. “Now son, when she brings us those drinks, you slide that sawbuck into her panties (as i said her outfit was pretty skimpy) and tell her there’s more where that came from,” the father instructed.

He looked at me with a sly grin, “Yessir, Johnny graduated today. He’s a man, and i’m gonna introduce him into manhood tonight.”

“Well, congratulations again,” i sputtered and walked back to my friends as soon as my beer came.

i had decided not to tell him his intentions were unlikely to occur at Crazy Eddie’s. There were a lot of legal restrictions about joints like this one and Crazy Eddie walked a straight line to avoid getting shut down. i had seen some big, bad, drunk bikers, and some of those slick businessmen fail at such attempts. It wasn’t likely a seaman recruit still wet behind the ears was going to score at Crazy Eddie’s Booby Trap. Maybe in Indiana, but not in San Diego.

But who knows? We didn’t stick around to find out.

But like the movie i watched on Father’s Day, it was incredible.