Last week, i returned to a time of innocence.

No,  not “The Age of Innocence.” That’s a movie. i’m talking about the time of innocence. Mine.

And it wasn’t me being innocent, not by any means. But it was my time of innocence. I was a small country town boy in a world of which i was not familiar, and i embraced it hook, line, and sinker without having a clue, even though from my perspective, it was a time i was the smartest i ever was or ever will be. Now, i know too much to be smart.

Three Vanderbilt attendees, 1962-1964, one of whom actually graduated, gathered together in a different world and a different time, like 56 years of time, this weekend far, far, away from that campus on Nashville’s West End. Our lives took us to different places in different ways and made us different from each other.

We have never accepted being different. The core, as this weekend demonstrated, was, is, and will be the same. We embrace our differences. And learn.

We have had our troubles, suffered personal loss, are much less spry with much less hair…okay, okay, Cy still has his hair, but it’s white.

i left home in the late morning Wednesday, drove through Camp Pendleton while a major Amphibious Landing Exercise, a “PHIBLEX” was underway. It brought back other memories, good ones, of organizing, coordinating this rather amazing show of strength through of Navy, Marine, even sometimes Coast Guard joint maneuvers, on that small stretch of shoreline and small area of the camp where I-5 runs right through the middle of the great divide between San Diego and Los Angeles (Thank Heaven!). But those are stories for later. The helicopters launching and landing on the assault ship and landing zone, the Marine track vehicles with one body of the crew projecting from the hatch running pell mell toward the training village, kicking up dust like nobody’s business, remains and an awesome, no,  a majestic sight to behold.

An hour later i make a couple of swoops through the flight arrival area of John Wayne Airport when Cyril Vaughn Fraser, III hops in, and we continue the northward trek to Long Beach Airport where we add one Mister Alan Hicks to the mix.

Thus began a visit to my age of innocence.

We checked into our Air B&B in San Pedro, California, a suburb of Los Angeles. It was about perfect for three old guys. It was a middle to low income neighborhood within walking distance to the downtown, filled with good dining of a number of ethnicities. So we ate, visited the Getty, the Queen Mary, the Ports of Call, and found them all good and interesting.

The three of us enjoy exploring the world of people around us.

We went to college baseball games: Vanderbilt vs. Long Beach State (nicknamed “Dirtbags” and you have to love that) at Blair Field in Long Beach, a lovely old ballpark, which generated recollections of Sulphur Dell, the Nashville  park for the Vols of the AA Southern Association: Boys and girls chasing foul balls, peanuts, even beer, friendly opposition fans, good times.

Vandy lost, 4-3 on pitching woes, errors recorded and mental, and silent bats at the end of the game.

Thursday, kicking around. No game. Lots of catching up. And then, the highlight of the day: 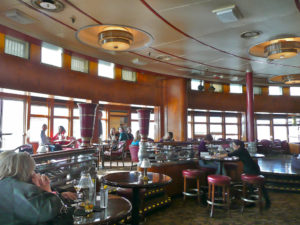 The Queen Mary “Observation Bar.” We sat at the large windows looking over the bow across the bay at the city sky scape of Long Beach. Visiting  the ship, walking the decks, and especially having a drink in the bar makes me feel like i have escaped to an incredible era long gone. This was about the fourth time, i have gone to the Queen Mary. Once Maureen and i spent the night. i thought the stateroom was quaint, romantic, beautiful. Maureen thought it was too small (It was a bit cramped but my goodness, it’s a ship, i thought) and having to 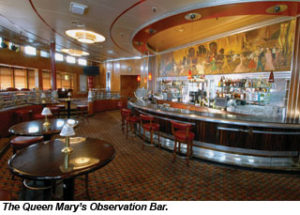 maneuver in the tiny head was difficult. For her, i can understand that, but it was a piece of cake for me. In fact, it beat an officers head on a FRAM destroyer. i want to go back and take a tour or two, but i am perfectly happy wandering the decks, dreaming about running into Cary Grant or Greta Garbo and joining them for a drink at the bar. If you are ever around Los Angeles, you should visit if you like to dream.

Then on Friday before the UCLA game, we hit the Getty. i have a post pending on that adventure…later. But we concluded with the UCLA game for Vanderbilt. Jackie Robinson Stadium. Baseball doesn’t get much better than that. The Commodores beat a team ranked higher than them. The Vandy fans almost matched the number of UCLA fans. Met most of them, and those ‘Dore fans are fun. Being men and hungry, we went to a nearby sports bar in

Westwood (You know? Home of John Wooden, the Wizard of Westwood), and the yesteryear college bonding got a shock. Crazy, crowded banks of televisions on banks of televisions with sports events no one was watching because the gazillion gabby students were fiddling with their smart phones. Needed that. Takes one down to earth. 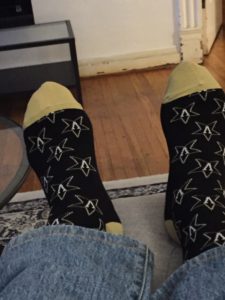 A note: i need to thank Maren Hicks. When we checked into our Air B&B, i immediately pulled out my socks to show to Alan and Cy. You see, i made a small donation to Vanderbilt Athletics, and they, in gratitude, sent me some socks, Vandy socks. i was proud of them but also thought it was quite funny. Alan looked disappointed. He dug into his backpack explaining Maren had received an extra pair and sent them with Alan for me. Well, the first game against the Dirtbags, i had not slowed down enough to change into Vandy socks. The Commodores lost. i wore my pair to the UCLA game. Vandy won. i knew about the high probability of rain Saturday and wore other socks. When Sunday came, i put on the socks Maren had sent. Vandy beat TCU.

So i’m pretty sure Vandy could win the rest of their games this season all the way to the College World Series championship if i wear my or Maren’s Vandy socks when they play.

i always knew Maren was magic.

Saturday was rain, but it was a magic day anyway. Alan and i went to USC knowing we wouldn’t watch a game, but we watched the coaches discuss cancellation while we watched the undeniable front moving toward us relentlessly on Alan’s weather radar app. The Vandy fandom was evident. They began gathering in the stands an hour before game time. Then, those coaches decided to begin with a rain delay. The teams retreated to their dugouts while the stadium’s audio kept playing music. So the teams picked their best players and a dance competition from opposing dugouts began. It was fun. For Vandy fans. USC? Not too many to enjoy the dance. Once they determined there was no way to play a baseball game, Alan and i retreated to an old haunt.

Alan was the “Director of the Southern Gateway” for the Maritime Administration for five years. He was a geographic bachelor in Long Beach, commuting on the weekends back to San Francisco to be with Maren and daughter Eleanor. i began working for Pacific Tugboat Service and traveled to 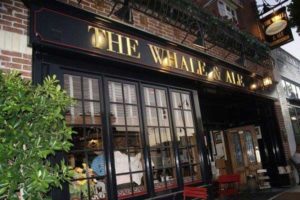 Long Beach almost weekly to conduct training and safety inspections. We made it a night. i would stay with Alan in his bachelor apartment. We would play nine holes of golf and then go to dinner, most frequently at the Whale & Ale, a British pub in San Pedro. Saturday, we returned. Nostalgia. Good British food. Nice folks, older, like us, maybe more. i kept thinking of how things change, how we bring in new, fancy, cleaner, neater stuff, but we throw out decorum, a certain way of doing things.

separates us, and the concrete expanse of LA is a world unto itself). Walt Fraser, Cy’s brother and a running mate of mine from the past, came over from his home in Pasadena to join us — i must pause here to comment the organizers and  Dodger management hosed this event up as much as possible; it was almost impossible how to get tickets, almost; the visiting teams didn’t get blocks of tickets; USC and UCLA did (we got ours at the UCLA game); parking was not available until thirty minutes before game time; the gate security couldn’t tell us the right gate to go to when; it was almost as if they didn’t care about fans from the visiting teams, the ones affected by such poor management; LA arrogance and another reason for me to never be a fan of the Dodgers after they left Brooklyn. But the game, the time together for the four of us, the Commodores playing class baseball made it a damn near perfect afternoon (except for the $15 beer).

And then it was over. i hit the freeways back to the Southwest corner.

The experience caused me to revise my take on city traffic. As my daughter Blythe once so wisely observed, “If you are going to make money in the traditional fashion, you are going to have to live in a place, a city where traffic is a problem.” i agreed then and i agree now. In the past, i have chastised Houston, Seattle, San Antonio, Washington, Austin, and others for bad, bad traffic. LA and New York City were givens. But after this past week, i must proclaim LA is the worst. i never really drove during “rush hour.” Most of it was on the weekend. There was never any of that LA crawl of thousands of cars going no where. But it was constant and it was expansive and it was always. Driving in LA requires total focus because there is enough traffic everywhere all of the time some bozo might take you out. i think i wore a good two or three millimeters off of my molars, grinding them without stop. Bonkers, i tell you, bonkers.

In spite of the traffic, the five days were simply magic from the past. Friends like we hadn’t skipped fifty-six years. Frat brothers and more sharing an old house (ah, the spirit of Maple Manor, another story). Innocence of a different kind revisited. As Bob Seger sang and i have repeated many times, “i wish i didn’t know now what i didn’t know then.”

Magic innocence. Revisited. Thanks Alan, Cy, Walt, and thank you, Maren. i really believe those socks are magic.

2 thoughts on “A Time of Innoncence”