i have three posts partially written. My book’s photo selection requires some work before inclusion in the layout.  Another manuscript edit is staring me in the face. So when i’m at this infernal machine, i’m working mostly on the book — Bob Lisi, i haven’t forgotten, the SYMLOG input you requested will be there in the next couple of days…sorry. But i thought the below should be put out now:

Golf yesterday at Admiral Baker North Course was delightful in spite of my terrible game. We teed off about 6:50, sunny and 50 degrees. The young man below was undaunted as we walked down the hill from the first tee, a bit skittish but undaunted, approaching within ten yards of us. The bunker on the second green initially looked like someone had not raked after hitting out, a major pet peeve of mine along with folks not repairing their ball marks and at least one other on the green (golfers need to understand they are stewards of the courses they play). On closer inspection, Rod Stark and i realized the bunker had been visited by several deer, not golfers. When we finished our round around 10:30 a.m., it was 85 degrees. We had gone from wind shirts and sweaters not being enough and shorts being inappropriate dress to a bit of a sweat. The deer and coyote had disappeared into the woods. 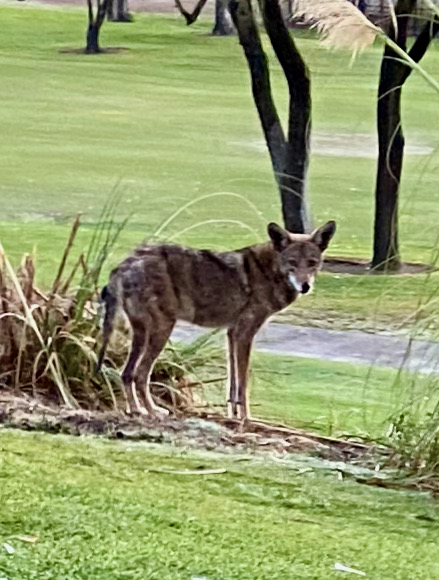 Last night, i relaxed and watched the school i am rooting for more and more: the San Diego Aztecs who have a terrific football program for a mid-major, a superb basketball program, solid men and women’s golf, and an excellent baseball team. My friend, Sarah’s dog, Billie Holiday, enjoyed the game together:

This morning, i turned the page on my “Non Sequitur” daily desk calendar and once again, decided Wiley Miller was somehow teleporting my life into his potential subject files for his comics. i am not sure of the copyright regulations on this, but i’m hoping many of you will check out his desk calendars and his comics on gocomics.com so someone won’t sue me. This one nailed me and our home improvement efforts. Thus far, i have defied death.