i am almost whole again. At least, i am almost as whole as I’ve always been, which is still several bricks shy of a load to steal an old saying from Roy Blount, Jr.

About three weeks ago, i managed to spill about ten inches of water from my glass onto the top of my Mac Air.

i kept my presence internetly (i made that term up in case you wonder) alive by my return to an old PC laptop. It was difficult to go back to Windows, and of course, i couldn’t get into a bunch of sites because my passwords were on the old computer. But i did make some entries on Facebook, and of course, i had to write my columns.

i thought it was going to cost me a gazillion dollars and twenty years of hard labor to get back to operating on my Mac Air with all of my data and programs and passwords and whatever the computer tech gods demanded. Then the Navy, of all things, came from a suggestion by Bob Schoultz, a golfing buddy, and the Navy Exchange computer repair and maintenance folks in the back of the store on 32nd Street (Old sailors, who have seen about seven hundred title changes of Naval Station, San Diego, still call it 32nd Street), they miraculously brought my computer back to life for a pittance of what the governing lords of Apple were going to charge me.

During my quasi-downtime, i’ve thought a lot about moving forward on this writing thing of mine. i don’t know if i will actually do anything, but i’ve thought about it.

i also piddled a lot. My piddling has a purpose much like my purpose in thinking about writing. i’m getting ready to do some major home projects, big work involving multiple skill sets in hardscape, electricity, chain saws, radial arm saws, picks and shovels, and all of that kind of stuff. My piddling in all of the above will get me prepared to start on these major, wonderful projects in, oh say, about 2044. i’ll be 100 if i live that long. And i won’t take any bets on that.

And of course, i played golf. Poorly. Yesterday, i concluded three straight days of walking golf courses. Coupled with my Monday walk-run, i pedded, i.e. moved across the ground using my feet, for over twenty miles. It’s been a while since i did that. So i’m proud of that even if my golf scores were rather pitiful. And the courses and the camaraderie after the rounds (coupled with a couple of beers) was the best.

And the rounds themselves, however horrible, give one time to pause and see nature in the middle of a big city…well, maybe not actually in the middle.

And now, on this Saturday, June 25, 2016, i begin again. To catch up, i thought i would post an annotated historical pictorial of my down time. Some may be repeats when i dipped back into the web world during my layoff. For that i apologize, but this morning with several of those piddling jobs begging to be wrapped up and the pressure of the cleaning ladies coming early (Maureen demands i clean up my mess before the cleaning ladies come, which i sort of understand but not really), i’m just flat too lazy to look them up. 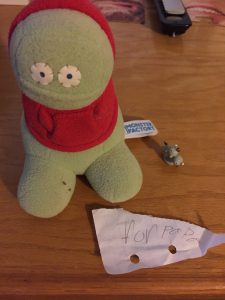 These two gifts in the photo have a place of honor on my desk. They are going-away presents from my grandson who gave me the gift with a hug and said, “I love you, Papa.” Pretty well takes the starch out of my sails every time i look at them. This was on the next-to-last day of our trip to Austin in May, one of the best trips i’ve ever made anywhere, anytime. Son-in-law, daughters, and one Mr. Samuel James Jewell Gander are settled in for the foreseeable future so our trips there will continue. We would move there. Austin is a vibrant city with all sorts of things for all sorts of people, not to mention an incredible kaleidoscope of cuisine. But the traffic is worse than San Diego, and it’s just too damn hot. Still i remain tempted. i thrive on gifts like these.

Hmm, it seems i’ve become too misdirected on this post. i mean i start something with an idea and it expands into damn near a book and i want to add photos and then each one seems like it should have a life of its own, and i ponder until it’s too late and the thoughts are bouncing around inside like the steel ball in an old pinball machine with no levers with payouts on the odds built up by adding nickels. The only way to direct the ball was to properly whack the front or sides of the machine without a “tilt.”

Charles Hon was the best at this. Legend has it he paid for his room and board at Vanderbilt from his pinball winnings.

i was never very good at pinball, and the idea balls intended for this post are caroming inside my head. If i tried to control it with taps, undoubtedly  i would laurer it (Okay, Charlie, how do you spell that?). 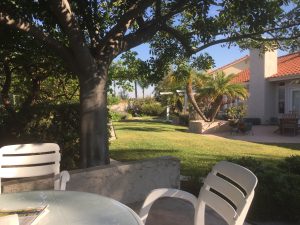 But then on a Sunday morning without my Mac Air, Maureen and i had post breakfast coffee in our backyard sitting area. i brought out the CD player and played Julian Bream pieces. The next morning, i went out by myself, put on Handel’s “Water Music,” and wrote on a lined paper pad.

Somehow everything then seemed just fine.

i may get around to posting some pictorial essays about that time, but for now:

This is what you get.