We, or rather i chose to drive rather than fly this year. The trip for the Independence Day celebration in Sonoma Plaza, an impressive historic presence in itself, has become somewhat of a mini-tradition for us. i pushed for the drive because i like to drive. Even my power two-day drive to and from Austin in May was pleasant to me. i thought maybe this drive would be a good way to convince Maureen we could drive to places on a regular basis.

i’m not sure the latter will be accomplished. 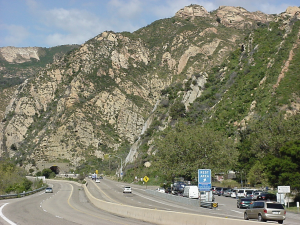 Driving, in itself, was tougher, even though less than half the distance of the Texas trip. As i have written in my Democrat column for Tuesday, Los Angeles proved on this trip it remains the most awful place to drive over everywhere else i’ve driven (note: i did not drive in Italy, Korea, or Hong Kong). More surprising (although as an afterthought, i concluded it might have been the upcoming holiday weekend and should have been no surprise at all) was the traffic on Thursday. North of Los Angeles, it was not always heavy but always there. No cruise control. It was work, but the vistas along 101 were 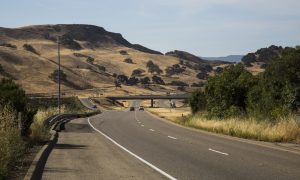 breathtaking (the photos here were taken from the Wikipedia and “flicker” websites: i was too busy driving to take pictures). In spots like the one to the right i thought of Marlon Brando and Karl Malden riding the hills in “One-Eyed Jacks.”

This area of our country always captures me with its history, its ocean, and its sweeping land.  Rolling into and past Ventura and Pismo Beach is like passing by a Brigadoon by the sea. Where’s Gidget? It is an incredible drive to 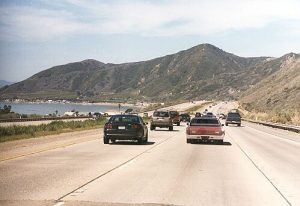 get back to what used to be the real world. The lovers of Florida beaches and the farmers back home in Tennessee would gasp at the expansiveness.

It is a ride  to remember, to escape from the pressures of back home, for even the  retired (sic) have pressures the younger working folk will not understand.

The area outside of San Francisco is as equally magical, if not more so, than the city itself.

So we arrived in Sonoma, walked about a block to the Sebastiani reception area and sat on a rock wall while sharing a bottle of Viognier. Afterwards, we had a lovely dinner in the backyard, watched the stars and planets come out to populate the heavens almost to the degree they light up the sky at sea from a darkened ship.

i have told my daughters Sonoma is a magic place. It is. After all, we are just down the way from Jack London’s Valley of the Moon; we have driven into to Sausalito where John Steinbeck had his claim. It contains erudite folks and people of means; it is folks that earn minimum wage and have picnics rather than dine out, of farmers and workmen; it is artists, artisans, and laborers. It is a cut across the people of America. 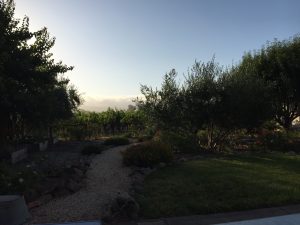 This morning, i took my coffee back outside and sat in the cool of the morning haze next to the pear and apple trees, the Hicks’ garden boxes of squash and herbs. It was quiet and moist. i thought of an old gospel hymn. : “i walk in the garden alone / while the dew is still on the roses / and the voice i hear / falling on my ear / the son of god discloses.” 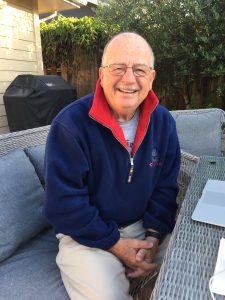 Of course, i forgot to bring a pullover knowing its gets cool here in the evenings. Alan, being the gracious host, offered me one of his pullovers. It is a heavy cotton pullover from the Hong Kong Yacht Club. There is no doubt i am in a magic place.

3 thoughts on “A Pocket of Resistance: Sonoma: Tranquility”