In case you haven’t noticed, it’s raining in Southern California.

Compared to rain back home, this doesn’t count very much on the scoreboard. But you see, us folks in the Southwest corner just flat aren’t used to it, and neither is the land. The average annual rainfall out here is ten inches, and it’s been woefully short of that for several years. Drought is the operative word, at least for the last year or so.

Between yesterday and this evening, we’ve gotten drenched by our standards. Some parts of the county have had almost three inches of rainfall. Down here near the border, only just over an inch has fallen, but Bonita just got out of a flash flood warning, and there are number of streets flooded and several waterways threatening to overflow their banks. Areas of San Diego have had more flooding, especially in the streets. You would think not knowing being used to this much rain, the denizens would not get out very much and be very cautious. But oh no, not Southern Californians. i have gotten tired of watching cars with water past their wheel wells stuck, grounded, messed up. And i’m not talking about out of the way sideroads. i’m talking about major thoroughfares. The commute parking lots of the freeways are longer than normal by a bunch. It’s ten p.m. and i’m betting there are folks who haven’t gotten home from their nine-to-five job yet.

And we are projected to receive a total of over four inches this week.

Fortunately, we do live at the top of a hill and are pretty well protected from any serious problems. We have checked our drainage system and it’s working pretty well. But there is a lot of insanity below us.

i had things to do outside, so i put on my rain gear and was in the garage talking with Paul Shipley, our landscaper supremo when Maureen walked out. She doubled over in laughter when she saw me. She said she had to have picture of me because no one would believe this was the man she slept with.

She didn’t take the picture. So i thought i would help her. i’m not very good at this selfie thing, but this should give you an idea of what she was laughing about: 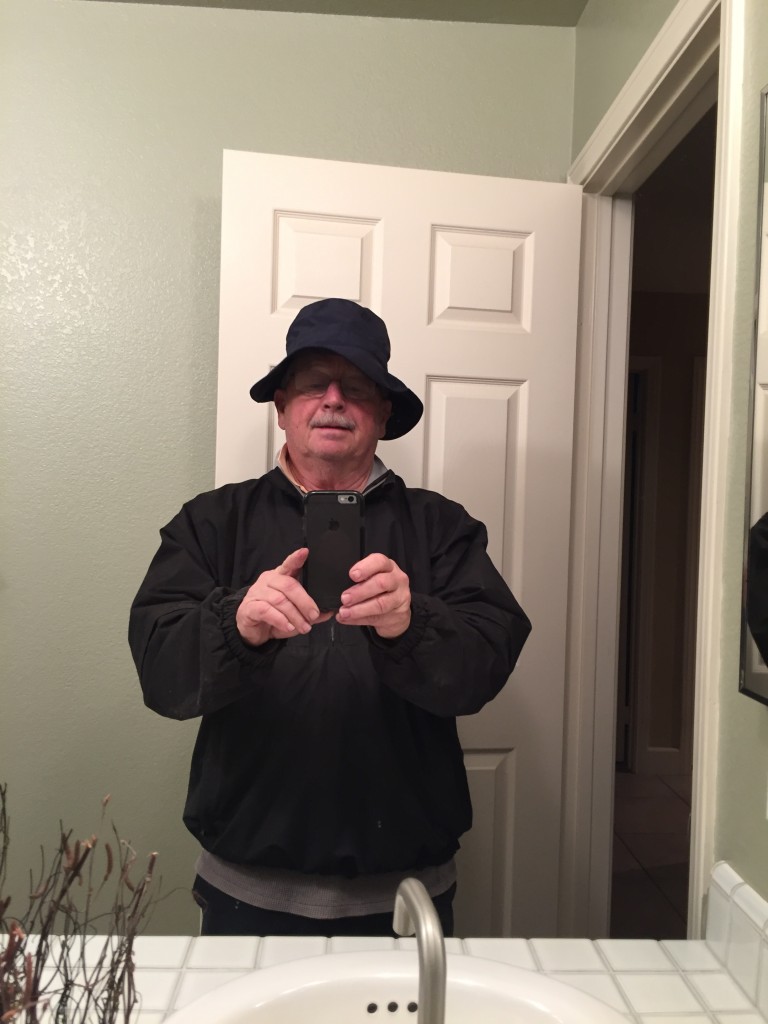 i didn’t think it was THAT funny.

But she better get used to it because it looks like i’ll be in this get up frequently in the next several months.