Late yesterday afternoon, i found something that brought back memories, and i can get caught up with my memories. i was in the middle of about a dozen projects of various ilk and running close to the edge. i needed a break.

In my continuing quest to leave no mess behind, i again turned to my photographs. i ran across an event at sea i had experienced on a regular basis.  It was an evolution that faded from frequent practice but is now a regular event again. Reduced liberty ports is the reason in this new age of the Navy.

The photos didn’t quite capture the breathtaking awe of such an evolution, but i could visualize the event in my mind. i was not the conning officer and being the the “supplying ship,” it was not as challenging, but the photos do capture the spirit of such a maneuver.

The year was 1983. The place was the Indian Ocean in between Diego Garcia and Masirah, Oman. i was executive officer on the U.S.S. Yosemite (AD 19).  We held our pre-underway hi-line brief and readied for the evolution. After gaining communication and radar contact with the U.S.S. Gallery (FFG 26), a lookout spied her on the horizon, and we maneuvered for the rendezvous. Captain Frank Boyle, Yosemite’s commanding officer and a man who had Navy blue running in his veins, contemplated the upcoming event in the captain’s chair on the port bridge wing. 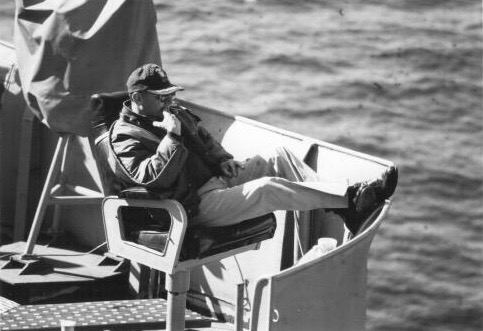 The bridge team gathered and this goofy guy in the sweater checking his watch, the XO, discussed the situation with the captain. 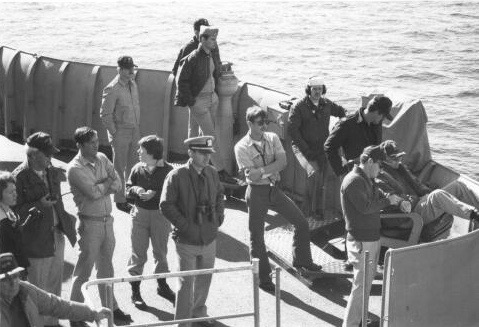 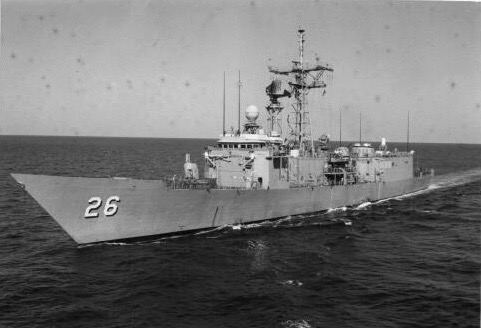 We raised the day shapes for “restricted maneuverability,” a ball, a triangle, and another ball (the second ball is not visible in the photograph and the triangle’s shape is not evident). 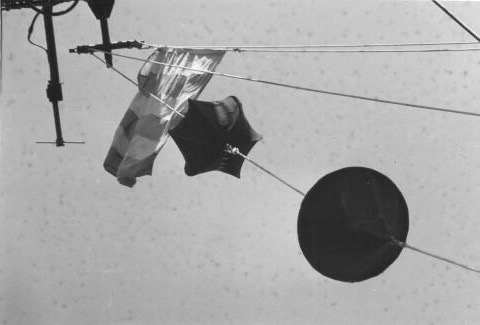 Gallery moved forward into position on our starboard side. 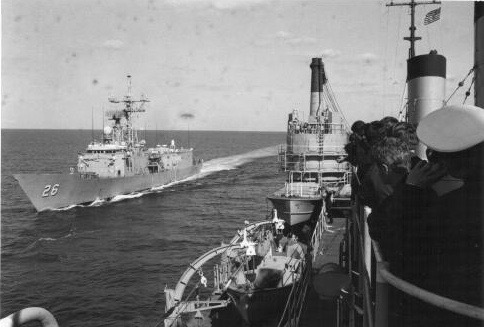 Once alongside in position, we could see her bridge. 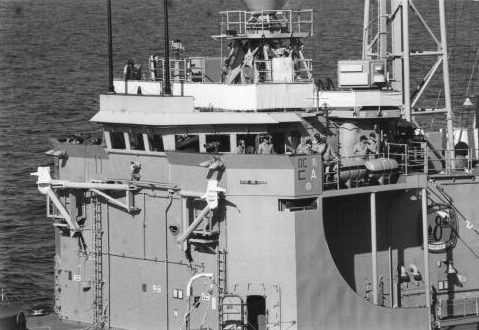 We began passing lines to linehandlers on the Gallery’s forecastle next to her missile launcher. 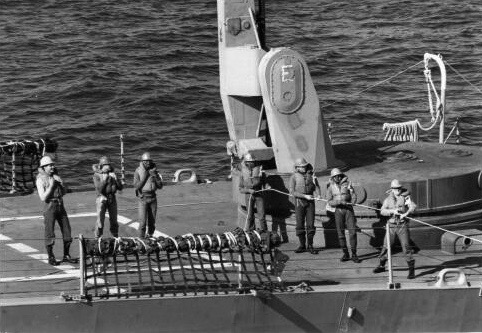 The lines were passed. 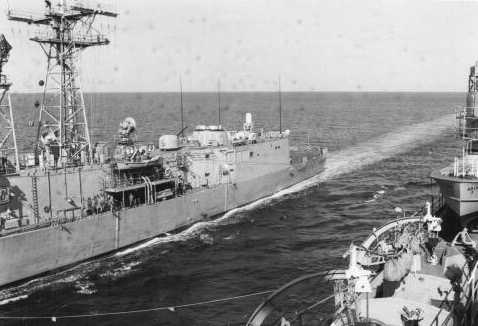 Our linehandling detail was prepared. 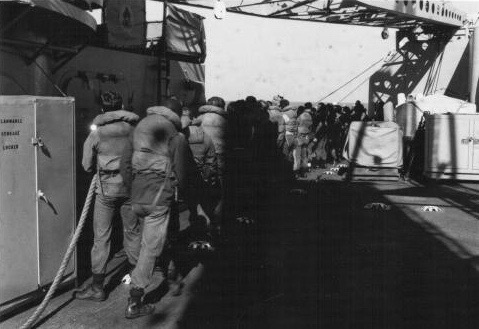 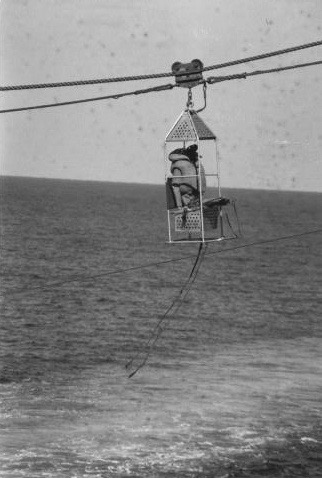 Later on the sail north to Masirah, we hi-lined two of our female officers, LT Sharon Carrasco and LTJG Emily Baker to the U.S.S. Lynde McCormick (DDG 8), a temporary “cross deck” so the women could experience life aboard a combatant. This was in the initial stages of the “Women at Sea” program. Most senior male Navy officers were not in favor of putting women on ships, and we were reprimanded for this transfer. Navy brass did not want good press on the program. They wanted to kill it.

In “UNREP” evolutions, it is much more fun (or scary) to be the ship coming alongside. It requires skill and experience, as well as a feel for the ship, the winds, and the sea, to maintain the proper distance and alignment from the ship on a steady course and speed, the latter nearly always twelve knots.

During previous UNREPS on maneuvering ship when i had the conn (driving the ship with instructions to the helmsman {rudder control} and lee helmsman {shaft revolution orders to the engineroom}), i quickly learned main control (the engineroom) would only laugh at a one revolution (a turn) change in speed. So when the ship was moving very slowly ahead in our relative position and i knew we needed just a slight reduction, i would order “drop three turns,” then “add two” turns” to get the one turn.

Staying alongside was made tougher, especially in rougher seas by the “Bernoulli Effect.” When the ships were alongside, only 120 feet apart ideally, the pressure created caused a drop of water level between the two ships of several feet. This drop created a force pulling the ships together. Conning was doubly difficult during UNREPs. i have included a photo from the web to give a good representation of the seas during an UNREP. 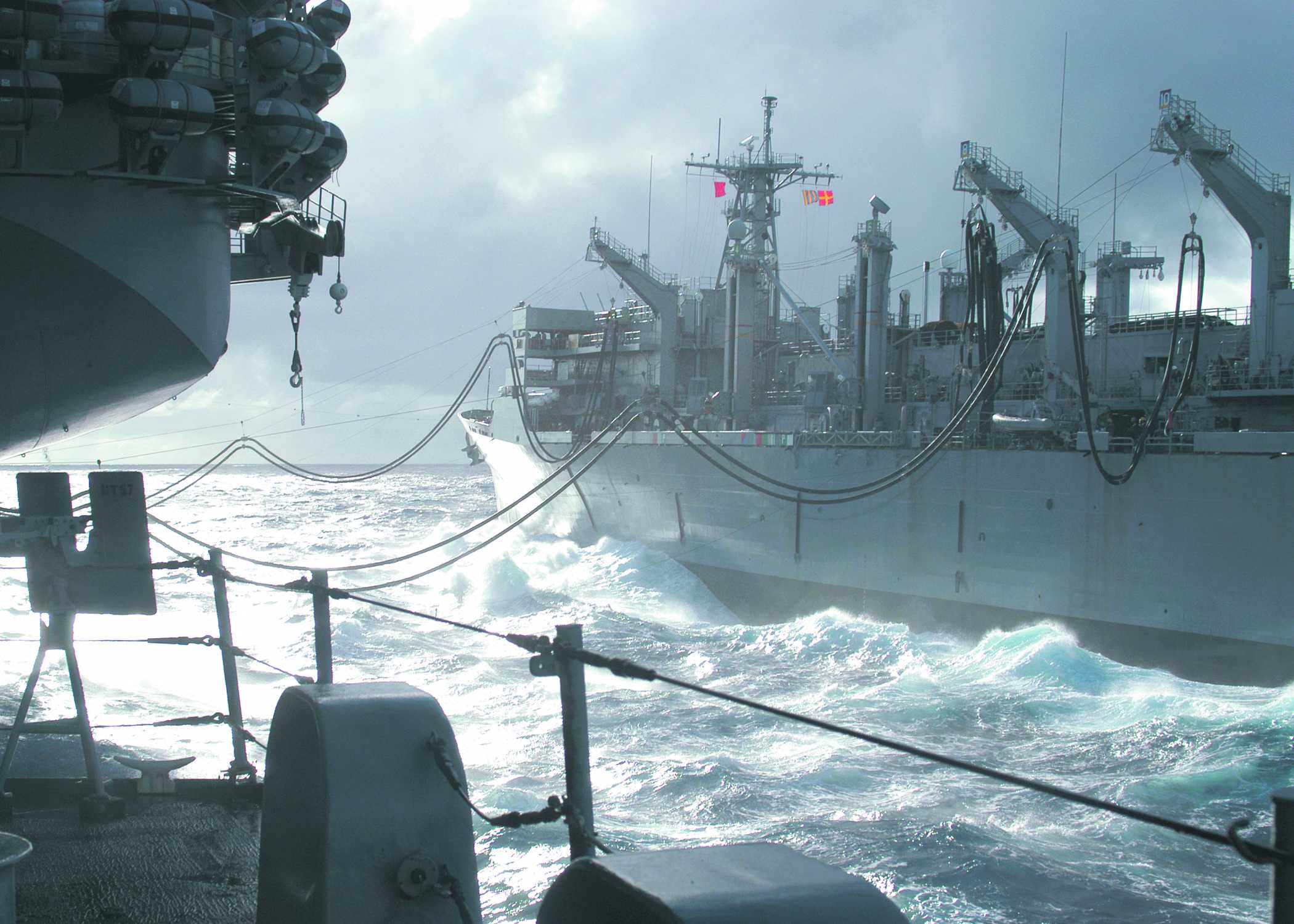 (The Navy’s UNREP photo was taken by Photographer’s Mate Airman Rob Gaston, USN  and can be found at  http://www.msc.navy.mil/sealift/2003/November/images/Supplyroughseas.jpg)

My first hi-line experience was when they used “double boatswain’s chairs” capable of carrying two personnel at once. i was in the last lift of 21 midshipmen returning to the U.S.S. Lloyd Thomas (DD 764) after spending a day aboard the U.S.S. Intrepid (CVS 11) in 1963. The linehandlers aboard the Thomas were exhausted after pulling the other transfers across. They wore out when i was about thirty feet from reaching the ship. i dangled there above the roaring sea for what felt like hours but probably was not more than a minute or two. i was relieved when the linehandlers regained some strength and pulled me aboard.

The Navy banned the use of the double chair reportedly when two admirals were dunked in the Mediterranean during a hi-line transfer shortly after my experience.

My funniest hi-line experience came in the late 1970’s. Amphibious squadron staff officers were cross-decked from the helicopter carrier flagship to an LPD for a day of inspections. The senior officer, not very well liked by many on the helicopter carrier, made sure he was the first to hi-line back. When his chair was midway through the transfer, ships rolled toward each other and the hi-line suddenly went slack. The commander was dunked into the water. As the ships rolled back away from each other, the boatswain chair shot back up and bounced up and down. Line handler tiredness was given as the reason for the dunking.

2 thoughts on “A Pocket of Resistance: On a Sea Far Away”