Wednesday morning began well: good exercise, stretching; a bunch of small chores, some solutions to some home tasks, a wonderful Maureen breakfast. Through it all, i listened to an LP.

i have resumed listening to LPs, delaying again my six-month old project to turn them all to digital, courtesy of the new magic turntable i got in October. 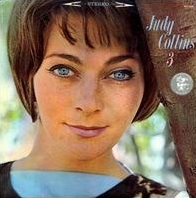 But today was special. i picked out Judy Collins #3 album. i forget how much i loved to listen to Judy Collins during transits between Korea and Vietnam in 1970. She and Nina Simone are two of my favorite all-time singers. Thinking about it, i sort of came up with Judy and Nina putting social injustice in the limelight. Somehow, Judy’s songs resonated with me more than Joan Baez.

i wondered if my two daughters have listened to Ms Collins. Blythe, when staying with me went through most, if not all of my record albums, but i don’t know if Judy caught her attention. i’m not sure if Sarah listened to any of my four Judy Collins’ albums.

On this album, Judy sings my favorite version of “Deportee,” written by Woodie Guthrie and also sung by Joan Baez and Willy Nelson. i also prefer Judy’s version of Pete Seeger’s “Turn, Turn, Turn,” better than Pete’s or the much better known version from the Byrds.

And then in 1979, her rendition of “Send in the Clowns,” was always included in “Baby’s” repertoire in the Subic Officer’s Club (Subic Bay, Philippines Naval Base) dining room evening show. “Baby” was a large Filipino with an incredible voice. She could cover almost any singer’s great songs. But the show stopper was “Send in the Clowns.” Stephen Sondheim wrote the song for his musical “A Little Night Music.” Sinatra and Collins took it to huge popularity. Judy did it best, and it’s included on her “Judith” album, which i bought primarily because “Send in the Clowns” was included.

But in 1979, LCDR Mike Peck, LT Pete Toennies, LTJG OW Wright (then later Al Pavich replaced OW), and yours truly, after a couple too many of “Le Bomb Bombs (a killer drink we discovered from the bar at the Peninsula Club in Singapore), would get up from our almost nightly dinner at the O’ Club, and wait. Then when Baby would reach the point in the song when the title is sung, the four of us would prance across the dance floor in a what was likely a ghastly semblance to a line dance.

Funny how a good morning start, and an old LP can make my day.