There is this small photo, badly faded, i have kept with me since 1974. It captures a two-year old as a bike rider. She is in a Texas A&M sweater and knit cap, and she is making the Aggie’s “gig ’em” sign with her left hand, her thumb jutting up in the air, with a big smile on her face.

i cropped the photo down to fit in a small frame and put it on my fold out desk in my stateroom on the U.S.S. Hollister in Long Beach. i would have put it in the log room, the chief’s engineer’s headquarters on a FRAM destroyer, but i seldom used my desk there because of so many engineers needing access to the space.

i did put it in the first lieutenant’s office when i transferred to the U.S.S. Anchorage in March 1975. The smile of  the girl in the photo lit up my day every day while my ship was on a seven-month deployment to the Western Pacific.

Even before my next tour at Texas A&M, the marriage was unraveling, and i realized i would not be a at-home dad for the girl in the photo. At A&M, the photo was on my desk in the NROTC office. The girl’s smile gave me hope in my darkest hour ever.

Then i truly went away. The girl in the photo stayed with her mother in Texas. That was the way things worked in those days. Regardless, i was faced with making a heart-breaking decision because i was determined to do what was best for my daughter regardless of the pain i felt at my loss of being with her every day.

From then on, the photo always has been near my desk, wherever  that might be. Tonight, it is on the lower hanging shelf above my desk. It is the first thing i see in the morning, and i greet the day with the thought of “Gig ’em.” The photo has always made it easier to take on the day, regardless of the impending good or bad.

Ironically, the girl in the photo, one Blythe Jewell Gander, eventually graduated from tu, or the University of Texas, Austin as it is called derisively by the Aggies, and she is not an Aggie fan.

i am not wise in the ways of modern photo touchup technology, so this is pretty much the way it looks in my small frame.

But it makes no difference for that photo of her smiling with that thumb pointed to the sky makes me smile, and i am ready to get it on every day. 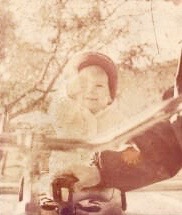