The newspaper ink in my blood sometimes is a negative.

My process is to write a news story, current. My schedule, my procrastination, my obligations, and my golf often interfere with publishing something if it’s more than a day old…old news, you see. So i archive it, thinking i might someday use it.

This kind of behavior adds to my frustration and stress, adding it to my inability to address and complete my schedule, my obligations, my golf, and even my procrastination (i like to procrastinate; i think of it as goofing off).

So FMG (Friday morning golf) is one needed relief for me. i put my phone on “silent,”  unless i forget like i did yesterday; open up my golf GPS app, and play golf with my buddies. They are a super group of guys, nearly all retired military veterans (but the others are just as as much good guys) who pull no punches in making fun of each other, telling sea stories, and drinking just a bit more beer than we should (it produces wonderful and long afternoon naps for me). i can say what i like and catching crap for saying it is perfectly all right. We are fast friends, and golf, unless it’s a particularly bad round of which we’ve had a few) is an escape by itself.

Yet walking the Sea ‘n Air course on Naval Air Station, North Island is happiness in itself. The views are spectacular, particularly the thirteenth through fifteenth holes, which play into and the along the Coronado beach with the Hotel Del Coronado looming to the east and the majestic Point Loma to the west (the beach faces south). F18’s, helicopters, and many other types of military aircraft fly over our heads on their landing flight path, sort of a reminder of what we did once, and a feeling of pride for what military service was and remains. It is always a good walk of about five miles.

And there are always a reminder of this world’s relationship with nature. The obnoxious and pretty much useless coots have apparently left for the summer, i hope, and the fairways, greens, and even the rough will be much better because of their departure. Occasionally, we will see ospreys. This season’s batch of youngsters are now flying, hunting on their own. We watched one set of parents in their nest in an eucalyptus along the second fairway tend to two as they grew and learned to fly.

There are the ubiquitous ground squirrels, seagulls, and crows hovering about, waiting for someone to drop a snack or even snatching a goodie out of a golf cart — the four young men in front of us yesterday declared one crow had eaten about six dollars worth of M&M’s, chips, and pretzels from their carts while they were on the green putting out.

Yesterday, we approached the third green haphazardly. I think it’s the toughest hole on the course with a large water hazard running on the right side from the 150-yard marker almost to the green. At the green end, there was this sight, which was a calm, appreciative moment for me: 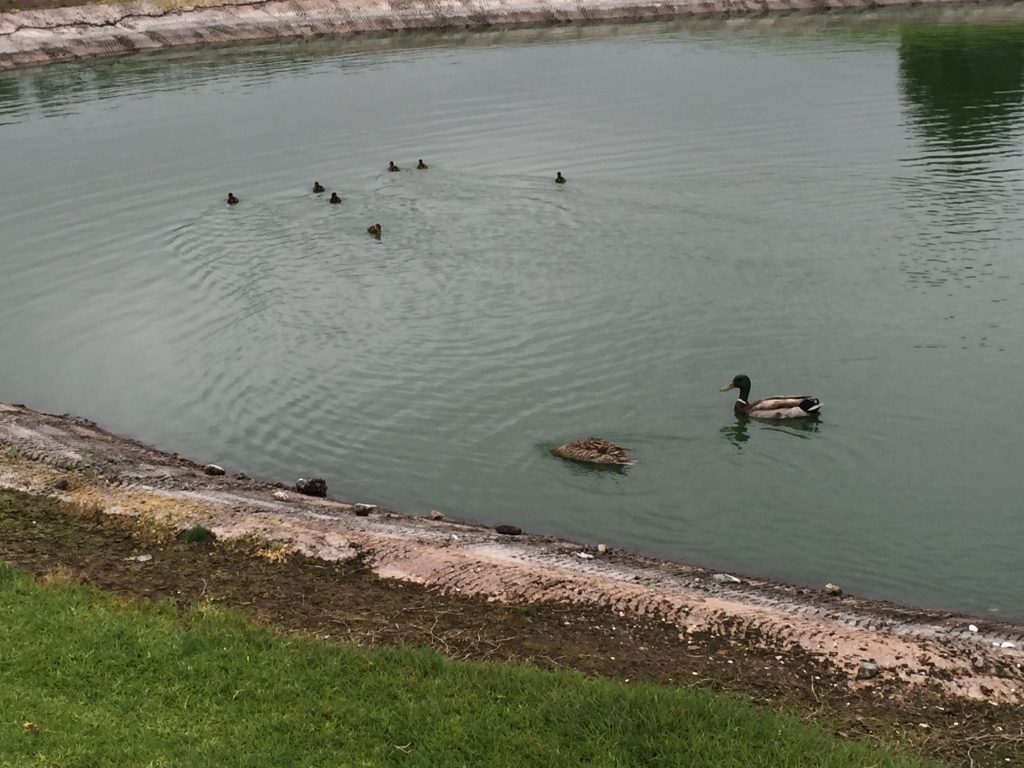 A drake and hen watching over their seven ducklings.

It is a nice reminder the world goes on in spite of us.

This post is a day late by my newspaper standards, but i’m fine with that.