i just finished my Democrat column for tomorrow’s edition. It was about Maxwell Martin, who died April 24.

i shall not write more about that until the column is published tomorrow, only to say Maxwell was my cousin, eleven years older than me, but more like a distant big brother to me  than a cousin.

It was difficult. i felt a bit guilty to begin with as i did not communicate with Maxwell as much as i wanted or should have. My facts about him are vague due to my faulty memory and great separation between my Navy, his work in Oak Ridge, and his living in Georgia and me in the Southwest corner. And it was just plain hard emotionally.

As i vainly searched for a photograph to accompany the column (it was Maxwell in a Castle Heights uniform kneeling down beside a very young me in the 1940s), i stumbled upon another box i had not thoroughly checked out before. This box was in a larger one Maxwell gave my father as he headed to Georgia and my father subsequently gave to me  about eight years ago. This particular box contained memorabilia of my grandmother’s, Mama Jewell we called her. When i opened it, a wallet was on the top. It had been my grandfather’s, Hiram Culley Jewell. From the contents i gathered it was likely the last one he owned before he died from tuberculosis in early 1939.

Sifting through, i found letters and cards from family members to Mama.

Then i ran across a small but very full envelope. There were about twenty  photos, small ones for the most part. i had seen them before in another box my father gave to me in 2002 containing the things he saved from his tour with the Seabees during the war, the last real war. These he obviously had sent to his mother. The accompanying letter had vanished.

There was one larger photo, about 3×5. i had seen it before as well. i may have even posted it here before. i just wondered how Mama felt when she opened that letter in 1945 and saw where my father was in Luzon, his living conditions, and realizing just how far away he was.

i didn’t cry…but it was close. 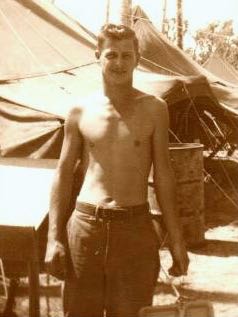