It actually started Thursday when Regina Gonzalez, our next door neighbor, invited us to dinner tonight with Luis, her husband.

Then yesterday, when i confirmed and asked if we could bring anything, Luis invited me to kayak this morning.

It was a beautiful morning

Just before seven, i helped Luis load up the instrument of torture on top of Luis’ car, and we drove a little less than fifteen minutes to Otay Lake. The lake was formed as a reservoir by damming the Otay River in 1897. In 1916, a rainmaker supposedly was too successful, and the ensuing downpour washed away the dam creating a wall of water between twenty and one hundred feet high, which killed fourteen people and washed away many farms and homes.

The dam was rebuilt and the reservoir is pretty much the same as it was then, but now it is a lake, a recreational area, and the past home of an Olympic training center. The Olympic rowing teams still train there. Their lane floats run almost the entire length of the race. 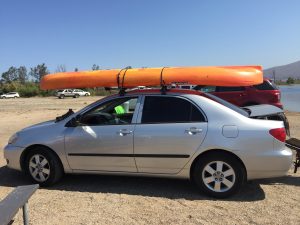 We unloaded and Luis installed the soft seats into the shell. Two of his friends and fellow kayakers pulled into the unloading area with their, surf ski’s, Starfighter versions of a kayak. Luis told them we would go ahead as the monster we had was slow but stable.

We loaded and pushed off the shoreline for our trek. The last time we did this was the first in the orange burden of workout because i had proven incapable of balance on Luis  surf ski. We had rowed for about a half hour on that junket. But this time, we were going for it.

This morning, there were no Olympic teams, about a dozen folks fished the shore, there were even less fishing boats, including the inner tube variety. There was just this really good kayaker (Luis) and the neophyte who for some strange reason, could not help but slide down in his seat. It meant more work with my arms and upper body, but less with my abs. Still, we covered about five miles in somewhere around an hour and a half.

As we started, there was some discussion about me trying one of the star fighters after our trip. But as we neared the shore, i realized i was too tired and trying the less stable boats would be a catastrophe, i begged off.

So the four of us sat on the decaying picnic table. Luis prepared breakfast. His bunsen burner hot plate was filled with tortillas, which in turn were filled with  a wonderful mushroom concoction topped with a delicious Mexican cheese. Luis served them with a spicy hot green salsa

and limes. We told jokes and got to know each other. To be honest, i was a bit ashamed as always as all three spoke passable, if not good English, and my Spanish remains non-existent although i keep trying to get better. Still, we had a good time.

i will do it again, thanks to Luis.

When i arrived home, i had planned to repair stucco on various places, primarily on the fence that borders our two property lines. I had kept finding excuses to not take this on for several reasons: i had not done any stucco for twenty-five years and was concerned i might not do it right; more immediate priorities kept popping up like naps and golf; there were bougainvillea around the areas needing repair, and i did not want to harm them or the other plants; and at the top of the list, although i would never tell Maureen, it was hard work.

So i took a nap. When waking, i decided it would be more prudent to just do one of the areas with the most damage, where i could see through the exposed chicken wire into the black of the interior.

Not wishing to upset Maureen, i dressed as she requested and even slathered myself with sunscreen. The job took about forty-five minutes. i was immensely proud of getting started and proving to myself  i could do it. i assessed the process and decided i could repair all the damages on the fence and a few around the house in about two full days. That meant it would have to wait until we get back from our Independence Day trip to Sonoma to celebrate with Alan and Maren Hicks for the third straight year, a mini-tradition. 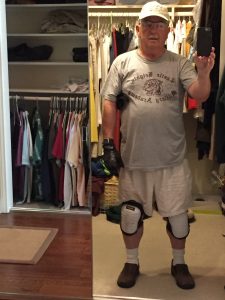 i showed Maureen and although she was positive, i think she was a bit disappointed i had not done more. We went inside and i attempted a conversation about something serious (or at least as serious as i can get). But she looked at me, giggled that timid giggle she has when i have done something stupid, and said, “I can’t have a serious discussion with anyone dressed like that.”

i was crestfallen. Over half of what i had on, i had done for her, to keep her from worrying about me getting blinded by stucco (what?), bitten by some ground monster hiding beneath the fence, losing my hand to a stucco float, frying my head in the sun.

i showered and dressed in something else. The serious discussion never occurred and we went next door to a wonderful lobster dinner with Luis and Regina, followed by espresso and a game of Petanc (Luis and Maureen beat Regina and me in a close match).

When we got home, i  went through email and Facebook posts. i was tired.

1 thought on “A Pocket of Resistance: An atypical Sunday”