i have been juggling a whole bunch of balls for a while and haven’t been putting a lot of stuff out here.

Some of that reduction is because spring is here…or was here. i wrote about that. Like the first part of May is Southwest corner wonderful. The week started off that way. i now am required to check the garden each day. i have added a composter, and there are cats and bobcats who have found the garden box looks very much like a litter box. Now why a bobcat would consider a litter box for deposits is beyond me, but apparently at least one thinks that way.

i am not the gardener my father was. i don’t hold a candle to Andrew Nemethy, Martha Tate or Susan Felts when it comes to gardens. i don’t even come close to my neighbors, Spud and Vonda Mumby and Ralph and Debbie Lavage even though two of Debbie’s five chickens have fallen into the claws of the bobcat or kin who created an account in my little 4×8 box garden. It’s just i wanted to have home grown tomatoes and strawberries.

So the first part of last week, i walked outside to tend my garden and experienced the glory of May spring. Out the kitchen door lies another project. i will be expanding and rearranging this flagstone to lead to a sitting/reflecting area, perhaps with a fountain next to the bougainvillea outside my office window.

As i walk across the patio, the tree in the planting area is in its regal splendor. i love the colors in this tree. Since our gardener, Paul Shipley is on a hiking trip along the Pacific Crest trail, he can’t tell us the name. For a long time we thought it was a plum tree. The Phoenix Robellini in the planter box is in its last days. Between Paul and i, we will be replacing with plumeria, a smaller, prettier plant with leaves throughout the year, at least in the Southwest corner. i get  to the work area. Right before the gate to the 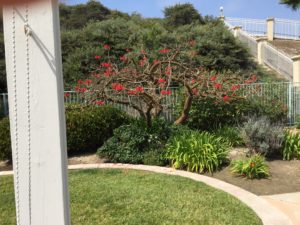 back slope, is one of our two coral trees. This one is of the Mexican variety. The Chinese version is bigger, but i’m into these. The blooms last for about two months, sometime in the spring. Like now.

i reach the fence my neighbors and i built about a quarter of a century ago. No, i have to admit i was just unpaid labor. Pablo, who is long gone back to Spain or Mexico, did the bulk of the work. The fence here is where Billie the alligator-hunting 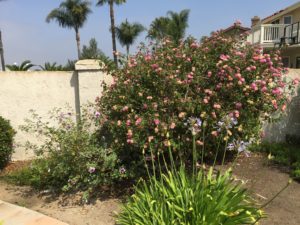 Louisiana Swamp Dog scales to go get the neighbor’s dog’s toys. It also is one of better spring spots. And that’s before the agapanthus begin blooming. It’s a pleasant place to do my minimal garden tasks and roll the composter. The garden itself is the beginning an experiment. Perhaps it is a connection to my father. Or perhaps this trial is my way of admiring nature and how oh so much better 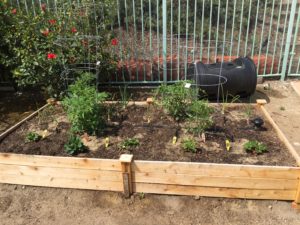 homegrown vegetables, fruits, and even chicken eggs are compared to the store bought kind, no matter how “fresh,” “range free,” or “organic” they claim on the shelves in the markets. As you can see, it’s not much but i’ll get tomatoes and strawberries pretty much all year long, and since i have my night visitors, i’ll be planting more onions throughout the year as well. It brings comfort to me.

But as i said, May Gray moved in early. It’s doleful to live in gray, especially in the 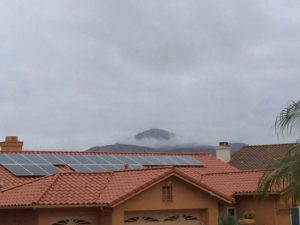 Southwest corner, but i can handle it knowing it won’t halt golf, i can wear a sweater in the early morning and late afternoon. And  just after first light, i walk out to retrieve the newspaper. No, i haven’t trained the dog or cat to get the paper, nor do i intend to train them. i mean i can be greeted by Mount Miguel with her diaphanous silk shawl of misty clouds peeking over our neighbor’s roof (Later, i will repost a poem about this particular mountain again). And feel like i really am home.

Then, just to prove me wrong, May Gray after just under a week of chilly damp weather breaks. We are having our rather sizable slope cleared. i began to nibble at it about two 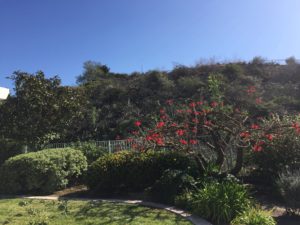 years ago and never really got traction. It’s a lot of work and old men have thin skin, so i would come away looking something like a bloody pin cushion. i was a bit sad to see the workers clearing the acacia with their chain saws. It would be a lovely day to work hard on the slope: not too hot, not too cool, low humidity. You know, Southwest corner weather at its finest. Well, since my bride decided not to wait 350 years for me to clear the slope, i must do something else to be outside. i worked the garden and composter a bit, then i took the young alligator hunting Billie for a walk. My 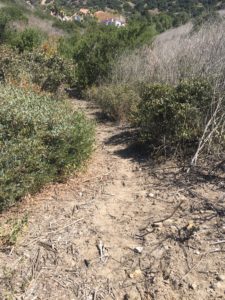 walk is a truncated version of the long one i used to take with the lab Cass where he chased and played with coyotes who, it turned out, were fearful of such a maniac. He also rolled over o’possums, damn near caught up with a road runner while taking my arm out of socket, and would take off to be on his own for a while at his whim.

Perhaps someday, i will do that with Billie. It would certainly get me back in shape because there is are two stretches about seventy-five yards in length on a ten percent upward grade. That’s in the future. Now, i must be satisfied with the trail behind 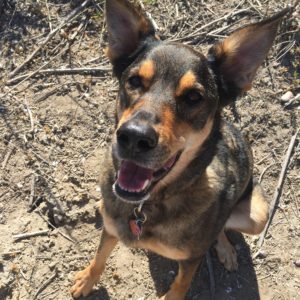 our neighbor’s house. Billie is fine with that. No alligators, of course. But there are ground squirrels, lizards, and all sorts of other fauna, including the aforementioned bobcat, and although the coyote population seemingly has diminished, i’m sure there are plenty of them out there, not to mention the snakes, foxes, and tree rats.  However, as pleasant as it is (and somewhat remarkable when we consider we are smack dab in the middle of suburbia), there are high desert dangers which appear innocent enough. i don’t think i’ve seen this type of cactus anywhere else. It’s local nomenclature is “cholla.” i learned shortly after moving off of the island of Coronado and out here in the truly high desert to be wary. 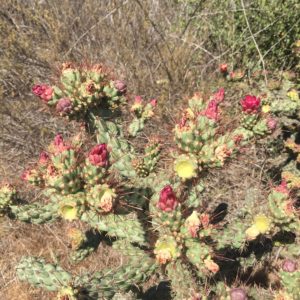 The cholla cacti are innocent enough looking, even pretty this time of year. Yet you can’t get too close. i know and was reminded again today. After we returned from our walk, i went outside to check how things were going. As i made a move, it felt like i had been cut on my knee. It stung. i thought i was bleeding although no blood was coming through my trousers. i raised the pant leg above the knee. There were two spines stuck into the side of my knee. Tiny things. But man, they sting and they somehow planted themselves through my trousers apparently when i unknowingly barely brushed one on the walk.

The walk’s over. i’m listening to the last throbs of the chainsaws as the young men flail away at the acacia. i’m thinking this is a good place. It’s in a big, big city but not too close, just accessible. i can see the Pacific from the top of my slope. The weather is good as it can get. Then i think of all of the places i have lived in my seventy-four years. About fifteen depending on how you count. i liked them all. Enjoyed the weather. i am in a good place now.

But i would like to go home for a bit. Lebanon, Middle Tennessee, Nashville, the lakes, they are still in my bones.

1 thought on “A Notable Week”