A Night (sort of) before T-Day, part one
(With apologies to Clement Park Moore for borrowing from his poem “A Visit from St. Nicholas”)

‘Twas the night before T-Day
but actually T-Day morn
when all through the house
and outside and in the garage and sort of all over the place
Not a creature was stirring, not even a mouse
cause the neighbor’s cats had either eaten them or scared them away and
our two indoor cats wanted to be fed and given lots of attention;
The stockings were hung by the chimney with care, 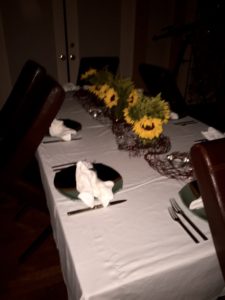 but they weren’t stockings and were the wife’s dinner table setting
In hopes that St. Nicholas soon would be there
and a whole bunch of family and friends and i was just kidding about St. Nicholas: i suspect that old fat fart would eat too much;
The children were nestled all snug in their beds
actually the children were out messing around in Vegas and Disneyland;
While visions of sugar-plums danced in their heads;
and jackpot winnings and catching the train and heading home;
And mamma in her ‘kerchief, and I in my cap,
except Maureen would never be seen in a ‘kerchief, a nice hat maybe, and the T-man had on

his green hoodie which he hardly ever uses and actually had the hoodie on his head because the T-man was freezing his butt off this early in the morning
Had just settled our brains for a long winter’s nap,
except my brain is never settled and i (okay, it’s out of the bag: the T-man is me who is a little grumpy because it was even earlier than when i normally arise)
When out on the lawn there arose such a clatter,
I sprang from my bed to see what was the matter. Away to the window I flew like a flash,
Tore open the shutters and threw up the sash.
Actually, the clatter was pretty much everywhere as i was getting the turkey in its bucket out of the refrigerator in the garage, starting the fire and getting the smoker ready and soaking the hickory chips and getting the grill and water pan ready and it was dark and the T-man as 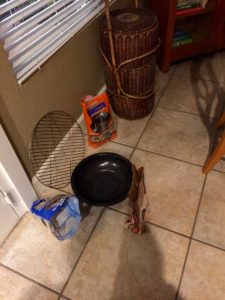 aforementioned was freezing his buns off and grumpy and we don’t have shutters, never have and T-man’s wife eschews sashes on windows; so it was pretty much a bumbling T-man making all of the clatter and cussing like a sailor (oh yes, he once was a sailor, or at least a Navy officer).
The moon on the breast of the new-fallen snow,
Gave a lustre of midday to objects below,
except we had one very slight dusting of snow one February a long, long time ago, and the super moon has done supered and it was beyond the horizon this morning because it didn’t want to be freezing its buns off like the T-Man. 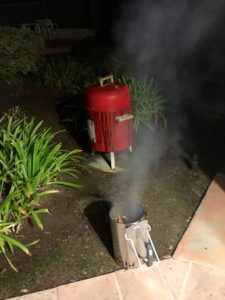 So the rest of this tale may be coming here
if the T-Man ain’t too sleepy, doesn’t eat too much turkey
or drink too much beer.
Right now he’s relaxing, hot mug of coffee in hand
knowing bedlam will soon take over the land
when wife arises and starts cooking the good stuff
to go along with the smoked turkey
and she’ll start coming up with all of the things
the T-man besides tending to the turkey needs to do
which means he won’t get a nap before the guests arrive
so he’ll be real grumpy again.