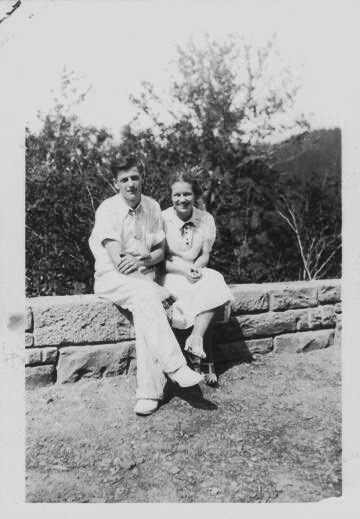 It is easy to forget, hidden between the folderol and celebration of the holiday. But we don’t forget.

Saturday, July 2, 1938. They were married. They made it to the seventy-fifth year of celebrating their anniversary. Forty-three days later, he left her. Nine months later, she joined him. Today would have been the seventy-ninth such anniversary. i’m betting they are celebrating. Together.

It was a long romance. She pointed him out to her mother as the man she was going to marry. He was in bib-jeans walking home southward toward the square on North Cumberland. It was 1932. He was 18. She was 15. They were in both juniors at Lebanon High School. He had been delayed three years when yellow fever nearly killed him and put him at home until he recovered.

The photo above was in 1936, two years after he dropped out of high school to help support his family when his father could no longer work after contracting tuberculosis. They, with family and friends, went to the Smokies, the go-to place for Lebanon folks back then. Her mother went with them. No hanky-panky back then.

She had an offer to play basketball for the Nashville Business College’s women’s AAU team after she graduated from LHS in 1935. She turned them down. Later she revealed to her daughter the primary reason was she feared another of several women who had eyes on him might steal him away while she was off playing basketball.

They were to be married outside the First Methodist Church but had to move it inside when it rained. Her grandfather, a former circuit rider and retired bishop performed the ceremony. It was the last event his father attended before passing away seven months later.

He returned to work as a mechanic making $13.00 a week. She returned to her job as a teller for Commerce Union Bank earning $22.00 a month. They made it through life never rich in money terms, but never really wanting either. They saved. They worked. They did pretty much everything they wanted to do.

I could go on and on, but it’s not necessary.

But i will tell you, if you are going to love, you should love like them. Forever. Seventy-nine years and counting.