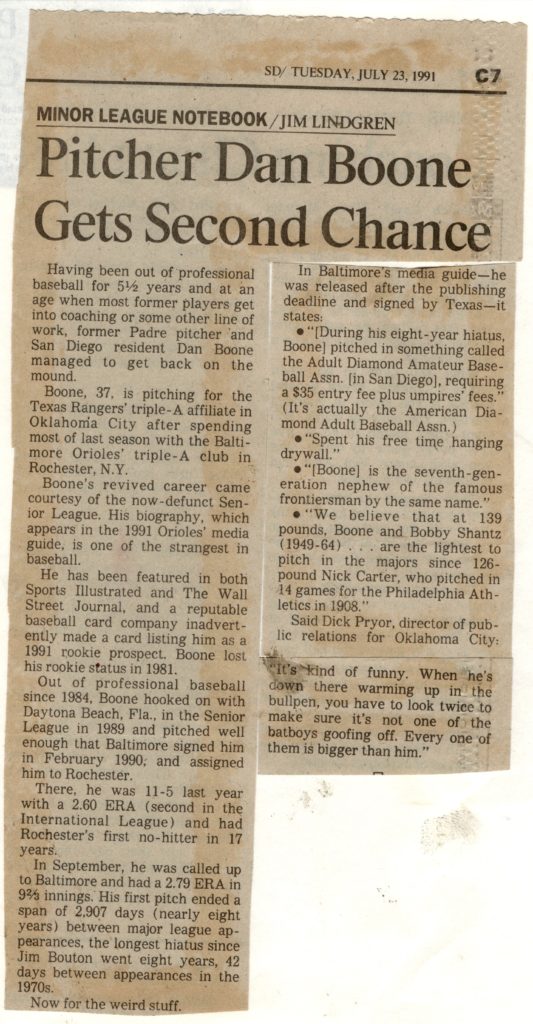 The above newspaper article brings back a memory, a good moment for me.

Dan Boone is from San Diego. His achievement noted in this article is nothing short of amazing. He had pitched for the Padres and in another major league team’s Triple A club in Louisville before falling out of professional baseball. He resumed playing in San Diego’s ADABA league (see the first bullet in the second column) before making it to the bigs again as recounted in this 1991 article.

ADABA is where we crossed paths. Bill Hammond, a Navy lieutenant, and a good friend who worked for me in leadership training, talked me into joining his team, the Rangers, in 1986. The minimum age to play in the league was 33. All of the other team members were just barely over the minimum age and a couple were younger, slipping under the radar. At 40, i was six years older than any other player on the Ranger roster.

Since i hadn’t played baseball since American Legion ball in Lebanon, i was a bit concerned about being able to play well enough to contribute. The first game i played was against the “Dodgers,” at the high school field in Ramona, about 40 miles northeast of our home. The Dodgers came out in LA Dodgers replica uniforms. But when they came out on the field, i laughed and knew i could play in the league. These guys, all in their Dodger uniforms all looked like Tommy Lasorda clones.

Then, the Rangers started their infield warmups. I was not starting, and although i was anxious to play, i was not unhappy i would slowly be back into the game i loved. Practice had proven to my teammates and me my old shoulder injury would keep me from making strong throws to first from my old third base position. i was fine with being the second base backup and third string catcher.

The starting second baseman was a doctor at UCSD. About my height, maybe just a bit shorter. He was called “Little Bob” to distinguish him from our big first baseman who was dubbed “Big Bob.” Little Bob was a baseball nut and had an early computer program where he could keep all of our statistics, individual and team. Our catcher had played what was then the “D” league for the Montreal Expos organization before becoming an insurance salesman. He was good. Period. He fired rockets to second base. When the pitcher completed his warm-up throws, our catcher shot his throw, a speeding bullet to second. It was a bit high. Little Bob, standing on the bag, realized the throw was high, extended both arms up, and leaped as high as he could (about six inches) to catch the high throw.

It hit him in the forehead.

i immediately became comfortable with the idea of contributing to the team.

i played for three years (it was year round league with a winter and a summer season). My last year was in 1989, quitting before the summer season about six months before i retired (sic) from the Navy. As usual, there are a number of stories about that experience to be told later.

But Dan Boone contributed to one of my finer moments. Dan was playing with one of the top-notch teams in the league. The one that went to the national tournament in Arizona almost every year. In my last season, we played Dan’s team at the San Diego “Cavers” high school field. Dan pitched a one-hit, 8-1 win against us. i did not get a hit, but i did get the only RBI in the games Dan pitched that season. One of our better players walked, he stole second. A fly ball moved him to third. I hit a hard grounder to deep second. It was good enough the second baseman could not stop the run from scoring and threw me out at first. It was the best non-hit i could remember in my storied (oh, okay, it was only storied in my mind) baseball career.