i drove by it the other day, but it was gone. It was a different time, a different world. It was lovely.

Our home was on the corner of Red Oak Place and J Street, a comfortable 1600 square foot, single-level with a fireplace in the family room. We might still be living there except this wonderful daughter came into our lives four years later. We needed more space with a baby and my retiring (sic), so we moved.

The back slope bordered a farm and J Street did not go further west than our property. It was like living on the edge of two cul-de-sacs. Our development was at the eastern end of the urban spread. About a mile east was a small development from the 1960’s built next to the community college. About three miles dead south was the 100,000 acre Scripps Ranch. That was about it. In high school, my brother-in-law and friends used to bike from Lemon Grove to these high desert, scrub brush hills for squirrels and rabbits. When we moved into that first home, the big ranch still existed and there wasn’t much else.

My dog loved it – i say “my dog” because even though Maureen and i got him while we were in Florida, he quickly became my dog, or to be more accurate, i became his special human. There was no master involved. He was my best friend. 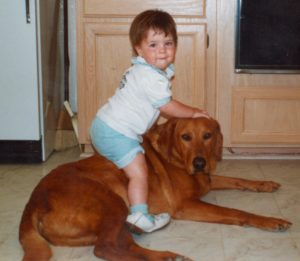 His name was McCaslin after Ike McCaslin, the young boy in Faulkner’s story, “The Bear.” We called him Cass. He weighed between 70 and 75 pounds and was all muscle with a heart of gold. He loved children and practically everyone else. He was technically a yellow lab, but his coat was golden like a golden retriever’s.

He was also a runner, like “if i can get out that door, i’m going to run as far as i can and you can’t catch me until i’m ready…or you drive the mini-van close and open the door.” He also could collapse, like “i don’t really care where you want to go, i am tired; i ain’t going; and i’m gonna lie here, right here, until i’m good and ready or you pick me up and carry me.” This was all right when he was a puppy coming back from the beach at Ponte Vedra, which was about half a mile, but it was a bit more difficult at 75 pounds and around two miles from home on the high desert in eighty-degree weather.

He body surfed at Coronado’s dog beach and would do so until he drowned if i didn’t make him stop. He chased and played with coyotes. He rolled o’possums. He damn near yanked my arm from its socket when a roadrunner darted out of the scrub brush and took off down the trail with Cass, the rope leash and my arm with him, right on its feathery tail. Oh, the stories we can tell. But this wasn’t supposed to be about my buddy.

This was supposed to be about the lost walk.

You see, that place i passed by the other day, now people, cars, streets, and houses upon houses used to be Cass’ and mine. Civilization sort of ran out about a quarter block east of our house until you reached the community college about three miles further east.

When we hit the end of the road literally, i would take the leash off of his collar and we would slowly ascend to the mesa. In less than a couple of minutes, we could feel like we were completely alone. We were. There was all sorts of game. When we reached a canyon filled with acacia we could watch the hawk leaving and returning to his nest: a big, red-tailed hawk.

Not quite a half mile into the mesa, we would turn left and walk down the slope into a deep arroyo. As with most of them, the stream at the bottom was not much more than a trickle, but trees and bushes abounded compared to the high desert scrub of the mesa. We could hear many birds chirping away. It was cooler.

One holiday morning (i think it was Easter but i don’t remember well), Cass and i headed out. As we got to the top of the mesa, there was a large manzanita along the path. It had grown up leaving room underneath the low hanging canopy. i sensed something as i walked by and realized there was a person curled up asleep underneath, a pretty good hiding place from the Border Patrol. i’m sure he or she was an illegal. After all, we were only about five miles, if that, from the border. I called to Cass and put him back on the leash as we walked by. i wondered what kind of conditions, what kind of hope for a better life would drive someone from their home, their family to cross the border in fear of being detected and with no real means of sustenance, walk to somewhere unknown.

We let him alone. After all, it was Easter, and i’m pretty sure Christ would have let him be.

i saw others, some walking brazenly down the path with a cheery “Hola” for me, which i returned. A few asked for food or water, but on my walks i had none.

And Cass and i kept walking. After all, this was more like no-man’s land. It was ours to enjoy but also to share.

On the south side of the mesa, about a mile from our start, there was a concrete slab about eight feet square. i surmised it was likely an out building for the folks who owned the property years before. Back then, there were a few cattle raised here, but not many. Perhaps it was a feeding station.

When my nephew, Tommy Duff, came out with his mother, Cass and i took him for our walk on the mesa. When we reached the slab, i told him it was a way station for cowboy elves, who still roamed the mesa. i made up some stories about them. i don’t know if Tommy really believed me or not. Funniest thing is i began to believe in cowboy elves and hoped they still were roaming the mesa.

But no more, not the other day when i drove by.

It’s all houses, single family detached, town homes, condos, apartments. People. Then they added schools and green parks and watered and watered, but it was desert and the water wasn’t enough and the wildfires came and the new folks were sore afraid. And we moved about two miles as the crow flies where i would watch the fires from my hill and look upon the development.

Cass lived until just past fifteen. We had open space and hiking trails to walk at our new home. We did exactly that until his hips became stiff and his eyes became cloudy and our walks were confined to a short circle around the back of our neighbors’ homes bordering on the open space. Then one night at bedtime, he rose from his prone position to walk in our bedroom with me for the night. He stopped and looked at the one step up to the front entry landing. Then he turned his eyes up to me and told me in no uncertain terms he was ready to go, that his quality of life was no longer worth it.

I cried then. i cried when i put him down. i cried when i buried his ashes in the flagpole at the top of our hill where he could look down on the realm of open space and the once high desert mesa he ruled.

When i walk up to the top of the slope and stand by the flagpole where he lies, i no longer cry. I actually get a feeling of joy knowing he’s there in his place.

But when i occasionally go out of my way to go by our old house and pass what used to be our playground, i feel sad we just keep adding people and water and somehow take away the joy of this high desert land.

i wrote a poem about Cass relating to this tale and it is below:

a part of my soul left today.
the stubborn, ole cuss of a lab was more me than him
i worshiped the way he defied the world
until it no longer mattered.
some people told me
i would know when it was time.
i did not believe until
that silly old dog told me two nights ago and
told me last night it was okay.
he has been my mirror, my dreams, my soul
fifteen years.
i could tell him me like i can tell no other.
i am not ashamed of crying, feeling lost.
my granddaddy would scoff:
it isn’t the way it was back then.
there is an emptiness in my soul.
i am really not sure i’ll recover.
yeh, the pain will go in time;
the emptiness will be covered by events passing by,
but the hole will never be filled,
he was one of a kind to me.
he was me
he is gone.
i will bury his ashes at the top of the hill behind the house.
you can see the beach where he body surfed;
you can see the trails where he ran with abandon,
scaring hell out of coyote, rabbit, possum and birds alike;
if you turn around you can see the home he ruled
welcoming unknown people as if they were long lost friends;
taking on all dogs who foolishly entered his territory:
the doberman, the big shepherd, and all other intruders
stood clear after one encounter .
my feet feel cool now.
For most of his life, he would lie under my desk,
while i read, contemplated or typed with
his head resting on my feet.
the silence is awkward:
even in his sleep, he would grunt, wheeze,
kick the walls, chasing something in his dreams,
my dreams.
run sweet dog again;
pant with delicious tiredness after chasing the blues away;
scan the field with those keen sparkling eyes that
always read joy to me;
catch the next wave to bound into the bubbling surf
shake the misery with the salt wetness
from your coat of gold;
lick the face of someone
to give them unmitigated joy.
goodbye, sweet Cass.
goodbye, you joyful part of my soul.

4 thoughts on “A Lost Walk”