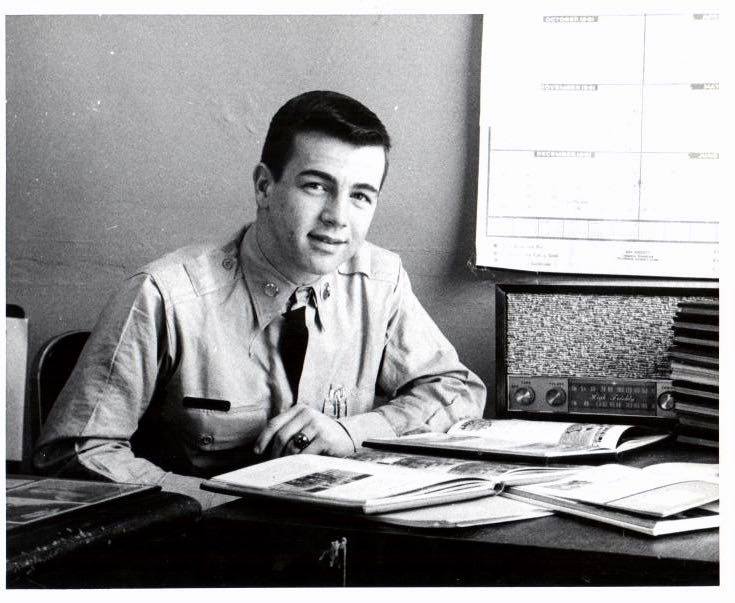 The caption on the memory read “Adjutant (CHMA yearbook) editor, 1962. Note this goober couldn’t keep his clip-on tie, on.”

It was a long, long time ago. Sometimes i think i should have stuck with that journalism thing, after all sports writers always had their ties askew (except for the dapper Fred Russell of The Nashville Banner). But then i would have missed…oh, all you folks approaching my age understand.

Another thought. That large desktop radio next to my left elbow got me in trouble, or maybe it was Mike Dixon who got us in trouble or maybe it was me who got us into trouble, but regardless, the radio played a part. It happened in October, about a year and a half before this photo was taken by the guy who earlier caught Mike and i in our trouble.

It was midday, Thursday, October 13, 1960 Central Daylight Savings Time, on “The Hilltop” at Castle Heights Military Academy. The lunch formation on the circle was at 11:30 as i recall. Mike Dixon was the sports editor of The Cavalier, the national award winning high school newspaper. i was his sports writer before i followed in his footsteps and edited the annual the next year. In addition, Mike and i played pickup basketball in the gym every afternoon we could until it was way past time to go home for supper. But that was another kind of trouble.

We also played baseball together at Heights and in Legion ball after being on opposition teams through the Babe Ruth and Little League years. i also was the “JV” point guard who was the only one who kept feeding Mike the ball when he got hot. Somewhere in the midst of all of that, we discovered a mutual admiration of the Pittsburgh Pirates, sometime begun around 1955. We could site every statistic of every player, and in back-yard whiffle ball games, we could even come close to replicating the stances of each Pirate batter (i preferred the stances of Roberto Clemente with his head roll and Rocky Nelson who looked like he was sitting on a milking stool in his stance).

So we had a problem. Back then, World Series games were played in the daytime. The damn Yankees — David Hall and Eddie Callis, eat your hearts out remembering 1960 — and the Bucko’s were tied 3-3. The deciding game started just before lunch formation. The two Pirate fans put our heads together, most likely during one of those late afternoon pickup games in the gym. They didn’t take muster at the lunch formation, so we could skip. We did. Company A didn’t catch i wasn’t there nor did Company C catch Mike when they marched in through Main into the mess hall.

We were scrunched down in the Cavalier/Adjutant journalism room in the back of the first floor of Armstrong Hall. That radio in the photo was moved to the middle of the desk and turned down low. Mike and i scrunched close to hear the play-by-play. The back and forth, the blue collar mid-section of the country against the white-collar New York dynasty: drama was rife. David Schoenfield wrote a wonderful description of the game for ESPN (http://proxy.espn.com/mlb/playoffs/2010/columns/story?id=5676003) and cites David Maraniss from Clemente: The Passion and Grace of Baseball’s Last Hero — Maraniss’ recent book, A Good American Family, is powerful — and Rob Neyer from his Big Book of Baseball Blunders. i won’t try and capture the beauty of that game nor the wonderful aspects of baseball and its players back then. Schoenfield, Maraniss, and Neyer have done that if you care to read deeper.

Dixon and i were oblivious to the books, the cultural changes coming to the sport and our country. We were glued to that tinny-sound play-by-play description of the game by Bob Prince, the Pirate’s announcer. And then came the bottom of the ninth. And Bill Mazeroski powered the ball over Yogi Berra’s head in left field. In my sometimes faulty memory, Bob Prince yelled his well-known phrase “You can kiss that baby goodbye!” Pirates win, 10-9. Pandemonium went nuclear at Forbes Field.

It also went nuclear in the Cavalier room. Dixon and i were rejoicing. We were slapping each other on the back, whooping with joy, and jumping atop the desks and continuing to jump and holler.

Major (at the time) JB Leftwich, the mentor, sponsor and all things adult about that award winning newspaper and annual was working through lunch in his classroom. His classroom was in front, adjacent to the Cavalier room in back.

He came in, catching us in mid-air celebration, and put us on report. i think it was the only time i went before Colonel Dan T. Ingram because i was on report up until my last month the next school year

(Colonel Ingram, the commandant, also was my American History professor that year. i remember him walking to the old single pane window in the front of the classroom, looking out, and thinking the pane was pushed up and the window open, spitting his wad of snuff from under his lip. The snuff landed in the center of the pane. The dark brown liquid dribbled slowly down the pane with the colonel quietly looking at it. He turned and walked back to his desk as if nothing out of sorts had occurred. His students managed to muffle their laughs. Not one said anything. Class went on, eventually dismissed at the bell.)

We didn’t display the decorum of cadets expected of us. But you know what? i’m glad i did it and would do it again.

2 thoughts on “A Goober Tale”