There’s this kid…well, not really a kid anymore. In fact, he’s a grown man, my kin, nephew actually, but damn near a long distance son. He was a kid for a long time. Then, he grew up fast. Went from being a carefree bachelor to a wife and five children in less than four years. Speed record.

He knew what he wanted. He got it.

Intelligent young man, he is. My younger daughter is almost like his sister. They will have spent fifteen years of Christmases together come December.

i find it amusing he has become successful, albeit extremely busy, especially this time of year, in the business where i thought i would end up, sports journalism. He’s a good one. i send him books about Grantland Rice and Fred Russell, my heroes. 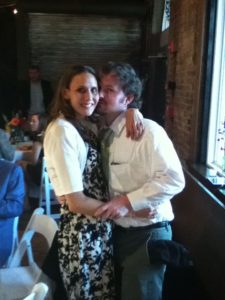 He has a wonderful wife, Abby. He has two stepdaughters. He treats them like actual daughters of his, and his parents treat those two like they are actually granddaughters of theirs. He and Abby had a beautiful young girl right after they married. They rounded out the group with two identical twin boys. Good thing they live on a farm, a farm on Signal Mountain, Walden actually. Good place for children.

He, like all of his cousins and his aunts and uncles and his momma and papa, has as special bond. His grandfather, Jimmy Jewell, and his grandmother, Estelle Jewell, in their home for seventy-five years naturally brought all of these folks, these kin together. Because he has this farm, he got a lot of the stuff his grandfather left behind. This man works with those tools like his grandfather did. Natural talent.

i’m proud, very proud of being Tommy Duff’s crazy uncle. Happy Birthday, Tommy. This morning, it occurred to me that not only am i proud of you, Grandma and Grandpa are proud of you also. i can see them laughing in happiness on your birthday.

And, if the truth be known, you are a lot like that ole man. i know. i’ve seen both of you operate. That’s also about the highest compliment i could give any male, being like him.

You, like him, are a good man. From where he and i come from, that puts you in high cotton.

1 thought on “A Birthday for a Kin”